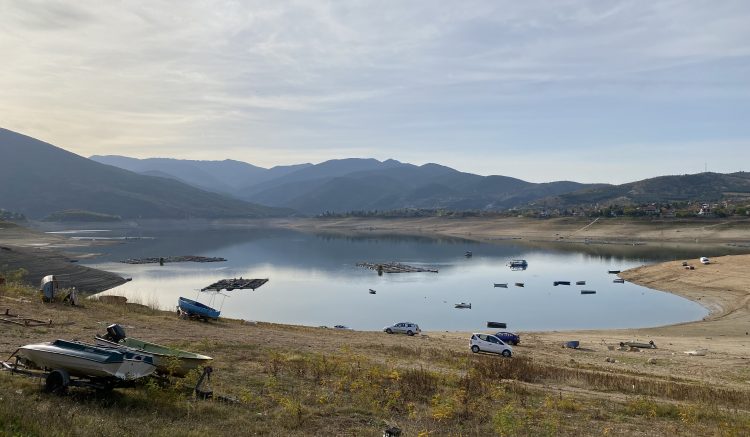 During my first trip to North Macedonia, I tried many different wines at Wine Berry in Skopje. One of my favourites was the Dark Horse Vranec from Wine Cellar Popovi. In fact, my inspiration to travel to Kavadarci was to visit the winery and also see the Tikveš wine region. Working from home for a week in October felt like a holiday. First, there were only sunny days with an average of 25C. Second, I had plenty of delicious food and wine. Third, the landscape is beautiful, with hills, vineyards, rivers and lakes, and the river Luda Mara runs through the centre of town. Finally, there are some nice museums, viewpoints, shops and markets in the town. In general, people were very friendly and were curious why I decided to visit their town.

Kavadarci is located about 1.5 hours from Skopje and also about 2 hours from Thessaloniki, Greece. Unfortunately, there is minimal public transport so the best way to get there and around is by hiring a car. I felt comfortable driving during the day, and it was mostly motorway. Although there are speed limits, the locals often went around me as I was driving too “slow”.

Nearby to Kavadarci is the Stobi archaeological site, which is well-preserved and beautiful. Next to that is Stobi winery, one of the larger ones in the area. I loved visiting this area, and spending some time exploring. I’ll write a separate post on the North Macedonian wine as there is a lot to share!

The breakfasts at Wine Cellar Popovi were superb and a highlight of my stay! Each day I ordered from the menu of eight choices. My favourite was one of the local specialties, pisii. It’s a fried puffed dough that is often served for breakfast. Accompanying the pisii is madjun, also a local specialty, which is like a molasses made from grapes. Other sides include tomatoes, cheese and olives. Additional menu choices included a cheese omelette, fried bread (like French toast), apple pie, and cheese pie.

In Lake Tikveš, there are carp farms and free-swimming catfish. Restoran Lule is located alongside the lake with a great view! I had the local fried catfish with sides of cheesy chips and grilled pepper. As you can see from the photo, it was a lot of delicious food! Also, I met some very friendly locals at the restaurant, and they invited me to join them for a coffee. One guy had helped me to navigate parking next to a tree on the bumpy dirt lot. It was great to chat with them and learn more about the area. One couple was in the transport business, and the guy’s brother owns Popova Kula Winery. And the other couple works in plastic recycling.

In the town centre, there were many restaurant choices. On my first night, I went to a small place called Kalimero-Grand Moral. They didn’t really have a menu and the owner did not speak any English. However, some younger guys at a table helped to translate. They were very friendly and were curious what I was doing in Kavadarci! Luckily, with their help, I was able to order my kevapi and salad to go. The guy gave me a huge platter and it was very reasonable. He also offered me a chocolate marshmallow while I was waiting. Overall, the service was so welcoming and friendly, and I could tell he was trying his best even if we could not speak the same language.

When I asked the local guys which restaurant they would recommend, they told me that the best restaurant in town is Sino. Of course, I had to try it and I ended up there twice. The Macedonian salad with fresh tomatoes, onion and grilled pepper was fresh and tasty. And the grilled kevapi and sea bream were delicious! Also, they have a choice of indoor or outdoor seating and sitting in the sun at the end of October was a treat. Helpfully, they accept credit cards, as I was running low on cash.

For a fancy meal, I had a 4-course Tikveš tasting menu at the Tikveš Winery Restaurant. This was matched with not four but five wines! Additionally, I recommend asking for a small tour, as the restaurant is located within the cellars. The surroundings are impressive and give you a view of the winery. There are huge barrels and tanks in every direction.

One day, for a quick lunch, I ordered a pizza and fried pumpkin from Pizzeria Fantasy. In fact, the pumpkin turned out to be courgette, and it was a delicious, huge portion. And the pizza was also huge, so it lasted for another meal. The people at the bar were friendly, but at first they were not sure how to take my order. I realised it was because the menu was not in English. Then I told them, no problem I have a translation app. They looked relieved!

For fast food, I ordered a Marilyn burger, which was a large burger stuffed with fries and cucumber. The burger was smothered in ketchup and I skipped the mayonnaise. When I first heard Marilyn I thought of Marilyn Monroe. Funnily enough, the wrapper on the burgers has a picture of her!

Local bakeries sold either sweets and cake, savoury breads or burek (puff pastry with filling). The sesame kuluri from Moja bakery was fresh and delicious. That place seemed very popular with students in the morning. However, my favourite place was Design by Piem, which I found by chance when passing by. The Tres Leches cake was amazing!

Of course, the main reason I chose to travel to Kavadarci was for the wine! I will write a separate post about the wine, as there are a lot of details to share. I love the deep flavours of the red wines, which I think benefit from the sunny weather. And a number of the white wine grapes are varieties I had never heard of, but enjoyed very much. These include Stanushina, Temjanika, and Bistera. I am writing this now as my prediction for the future- one day soon North Macedonian wines are going to surge in popularity! They are a hidden gem for the moment.

A: No, you don’t need a guide unless you do not have a car.

A: It is mixed, but less people speak English than in the capital of Skopje. Therefore, GoogleTranslate or similar can be very useful. Also, since the alphabet is Cyrillic, the camera function is helpful for instant translation. It is not perfect, but usually you can get the main idea.

A: The city centre of Kavadarci is walkable and safe. However, to get to the vineyards and surrounding areas a car is needed.