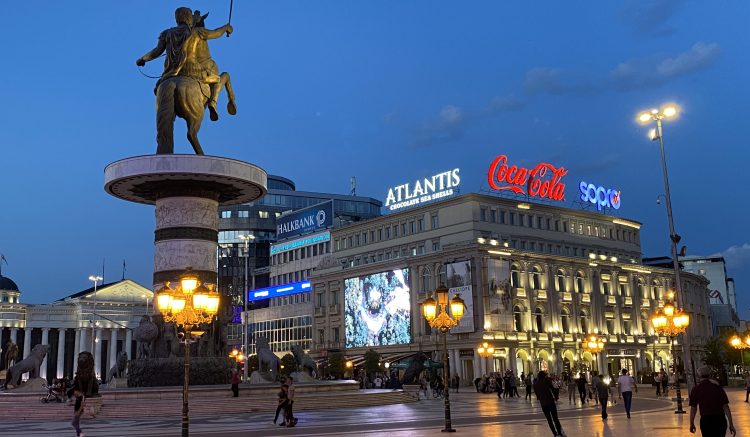 Since 2020, I had been planning to travel to North Macedonia. Unfortunately, we had to cancel that trip due to the pandemic. Therefore, I was happy to finally visit in June 2022! For the first trip, I spent most of my time in and around Skopje, the capital city. In a separate post, I have specific recommendations for Skopje . Also, I wrote a separate post to share the various Skopje street art as there were too many photos to share in one post. The beautiful Canyon Matka and Mount Vodno are just outside of the city, and can be reached by taxi or tour bus.

Additionally, many locals have recommended Lake Ohrid and the wine region, so those were on the list future trips. In October 2022, I spent a week working from home in Kavadarci, a city of about 40,000 in the Tikveš wine region. It was a friendly town and easily walkable. However, I was glad to have a car to explore the area. Outside of the town, there are vineyards, Lake Tikveš, Stobi archaeological ruins, and more.

At the end of the week, I drove to Bitola then back up to Skopje for a day. Bitola is a beautiful city with an old town, market, interesting architecture and a buzzing cafe scene. A couple of friends come from this city, so it was nice to visit the place they come from. This city was also important in history as a capital during Ottoman times.

Once I was back in Skopje, I had a few hours to walk around the city. Of course, I stayed again at the friendly Hotel Super 8. In fact, they recognise me now! My future plan is to organise for a group of friends to travel to North Macedonia, before it becomes a major tourist destination. I would also like to see Lake Ohrid. I had planned to drive there for a day trip, but the locals told me that the roads are not that great usually. And they are even worse right now due to many repairs. It takes three hours to get there from Kavadarci, and three to four hours from Skopje. That will be for the next time I travel to North Macedonia!

The official currency of North Macedonia is the Macedonian denar. As of October 2022, one British pound is 70.9 denars.

First of all, let me say that I truly enjoyed the variety of food and wine that I tried in Macedonia. I was not sure what to expect based on the location. Although the traditional diet does contain a lot of meat, there are also a lot of salads, cheeses and amazing desserts. For either lunch or dinner each day, I tried to eat a lighter meal. Luckily the vegetables are very fresh and tasty!

On Sundays, many places are closed in North Macedonia due to a recent government law on Sunday openings. However, tourist places and some restaurants and cafes will be open.

The guide to Skopje has a list of recommended restaurants, bakeries and cafes. However, for this guide about travel to North Macedonia, I have focused on types of food and drinks. Also, when you are ordering and everything sounds delicious, just remember that portion sizes are usually quite large!

Pindjur is a very typical starter or side made of pureed tomato, pepper, aubergine and garlic. Usually it is eaten with bread. The vine leaves wrapped around meat and rice served with soured cream are another delicious starter. Sometimes there is a vegetarian version as well.

A piroshka is a long, fried, breaded roll filled with cheese and ham and served with pickle mayonnaise.

The national dish is Tavche Gravche, a very delicious version of baked beans. These can be found at the more traditional restaurants which often have the word Gostilnica in the title.

Turli tava is a casserole with veal, chicken, onion, aubergines, carrots, green pepper and tomatoes. It was so tasty, straight out of the oven.

Macedonia is well-known for kevapi, also known as kebabs or kebaps. Don’t be alarmed that a serving portion can be 10 kebaps per person. In fact, they are small pieces of spiced minced meat rather than a big stick of meat like we may be used to in the UK or US. These are often served with fluffy bread and grilled vegetables.

For a healthier option, try the shopska salad with cucumber, tomato and shredded goat’s cheese. Similar to the shopska is the Macedonian salad which has cucumber, peppers tomato and onion. Usually the salad was served without dressing so I had to ask if I wanted oil and vinegar.

Let’s start with the drinks! Macedonian Wine is underrecognized. In fact, it is also relatively difficult to find in the US and UK. Yes, I have looked! My favourite place to taste wines besides the wineries themselves was Wine Berry in Skopje, owned by a friend of a friend.

The reds are more famous than the whites. And personally, I prefer the reds. There are some typical varieties such as cabernet sauvignon and merlot. However, Vranec is very popular, and it is a more unusual grape for this area. I love its rich and fruity taste.

If you are less into wine than beer, then try the Macedonian beers. I found most of them to be drinkable and light. There’s also the rakija if you want to try the local (strong) liquor.

When I needed a fast and substantial lunch, I ordered the Macedonian burgers. The buns are larger than I am used to. And they are stuffed with a burger, fries and cucumber and/or tomato. Usually, they are also drizzled with ketchup and a flavoured mayonnaise sauce. It is very messy but also tasty. The burger is probably enough for two people!

The hot weather during the summer is perfect for ice cream. There are many options in Skopje, and it is difficult to say which is the best. In the smaller cities I didn’t find specific gelato shops, but there was plenty of ice cream for sale at supermarkets.

The bakeries also have a lot of tasty snacks so see below for some options.

Finally for my bakery experience. I love dessert, so I have tried a lot of cakes and sweets. In general, I found that the cakes here usually have a lot of cream or mousse. The baklava is a great mixture of crisp and syrupy. And the tulumba is a fried cylindrical dough soaked in sugar syrup.

On the savoury side my favourite was kuluri, a sesame bread ring similar to a bagel. In fact, they remind me of Jerusalem bagels. I am also a big fan of borek, a type of flaky pastry filled with either cheese, spinach, meat, fish or vegetables. Those are great as quick meals on the move.

Of course, Kavadarci is mainly known as the centre of the Tikves wine region. There are many choices of wines to try with some unusual grapes. Temjanika is a fragrant white wine that smells sweet, but is actually dry. Normally I don’t love white wine but I loved that! Stanushika is a native grape and the rose made from it is fruity and fresh.

Most of the vineyards also produce a strong alcohol called rakija. I tried it a couple of times, and it is tasty but very strong!

One of the first local foods I tried was pisii. It is a fried dough served for breakfast with madjun (grape molasses), tomatoes, cheese and olives. It was delicious! And I hope to recreate it at home soon.

The local lake Tikves has carp farms and also wild catfish, which are served at restaurants in the area.

A: No, not in general to see Skopje city centre. However, to visit the rest of Macedonia you may need a tour guide, a taxi or a hired car to get around.

A: Almost everyone spoke some English in Skopje. At times, I had my GoogleTranslate app ready to go but I didn’t need to use it very much. However, outside of the city fewer people speak English and a lot of signs are in Cyrillic. The camera function is helpful for instant translation. It is not perfect, but usually you can get the main idea.

A: Yes it is safe and easy to walk around on your own. As in any city, be more careful at night and be aware of pickpockets.

A: Finding postcards was not so easy but getting stamps at the Macedonian post was easy. If there is more than one window look for the words Pratki Dergesa. I went to the incorrect queue first and that was for paying bills. See Sending Postcards from Abroad for details on cost and the time it took to reach the USA.