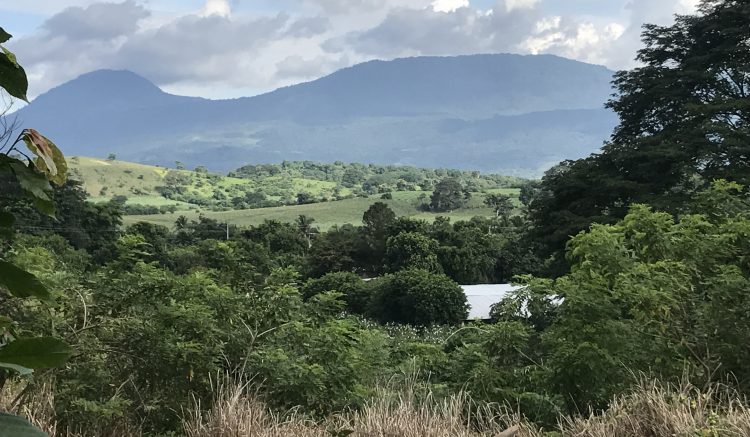 I had the opportunity to travel to El Salvador in August 2017 on the way from Costa Rica to Cuba. However, it was a short trip and I passed through San Salvador and the surrounding area for just two days. Luckily I found Vladimir Gomez, my driver in San Salvador, via Trip Advisor. He now has his own company EVGP Transporte. And I can highly recommend him as a reliable, friendly, and helpful driver in San Salvador and surrounding areas! On this page, I share my experiences, tips and recommendations.

Although El Salvador has a local currency, the quetzal, the US dollar is the official currency.

The Salvadoran food was definitely a highlight of my short trip. After sightseeing, Vladimir generously treated me to a traditional dinner at Tipicos Margoth. The place was absolutely packed with locals and finding parking was a challenge.

We tried a little bit of everything and I had horchata, a milky cinnamon drink.

Enchilada is like a tostada with shredded pork, pickled cabbage, cucumber, tomato and a slice of egg, topped with red sauce.

Pastelita are little pastry pies filled with vegetables and chicken

Empanadas are plantains wrapped around a filling. We had one filled with refried beans and the other with thickened milk.

Pupusa is like a tortilla pocket filled with beans, cheese and/or pork. These were made very quickly by women and then fried by men in the restaurant. You can try my recipe for pupusa at home!

A: Yes or at least a reliable driver. It is not very safe to travel on your own unless you are in the beach tourist areas.

A: It was easy to find an English-speaking driver. The hotel staff spoke some English. Most shops and the post office spoke Spanish only.

A: I would not recommend it unless you are heading straight to the beach areas. San Salvador is not very safe and tourists stand out a lot. My driver told me that tourists are often robbed and it is best to stay in the car especially in busier areas.

A: Very difficult! I had a difficult time to find postcards and then the post offices, when we could find an open one, did not seem to have any stamps for international post. They told us to try again next week, but unfortunately I did not have time to wait until the next week so no postcards sent from El Salvador. See Sending Postcards from Abroad for comparisons with other countries.