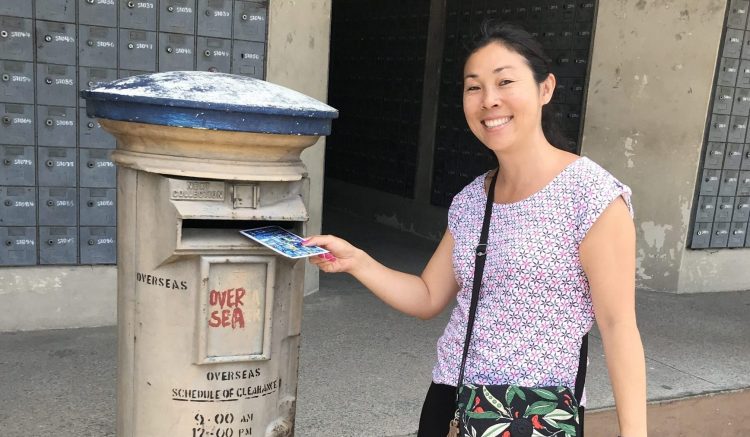 Have you ever wondered when will my postcard arrive back home? And will it ever arrive? This post summarises my experiences with buying postcards and sending them to the USA from abroad over many years.

I try sending postcards from abroad to my parents and sister from every new city I visit. This is my way of including them in my travels even if they were not able to physically join me on the trip. In addition, if I have time, I also send them to other relatives and friends to let them know I am thinking of them even from far away.

This ritual of sending postcards from abroad can sometimes turn into quite an adventure. For example, when I was in Lagos, Nigeria in April 2018, my friend Donna and I went on a long mission to send postcards. This would prove to be more difficult than imagined. First, we had to search for postcards, and could not find any at the local stores. Eventually, we found postcards with photos of the art in a local gallery, but could not find any of the city. Well, it’s the thought that counts!

Next we arrived at the Lagos Post Office, where the two postal workers were very helpful, but seemed completely surprised that we were asking for stamps. At first, when we asked, they looked confused at us, then at each other. After a few moments, they jumped into action and started searching in folders, and in the back offices. Then they came back with some stamps then sheepishly informed me that they had stamps… but I would need to fit 7 of the 100 naira stamps on each postcard to have enough postage. It was too late, since I had already written them. Therefore it was going to be tricky not to cover the writing nor the address. After all of this effort, I figured I had to give it a go. In the end, we all worked together to paste stamps on postcards, which were now half-covered with stamps.

Donna suggested that I should take a photo of each of them in case they did not arrive. So I took photos, then hopefully inserted them into the post box outside. Next, she jokingly suggested that I note the date and see how long it would take to reach my family, and then compare to other countries. What a brilliant idea! I had been sending postcards from abroad for nearly two decades. My parents and sister had been very conscientious about emailing or texting me to say which day they had received them. I went back through travel diaries, emails and texts to gather the cost of postcards, cost of stamps, date sent and date received either to the USA (and less often to Europe).

Here are the result of my efforts. Just keep in mind that these were my experiences, and not an official record of average delivery times between countries.

How long it took

There were big variations between countries, and Nigeria was by far not the slowest! The slowest was from Ethiopia to the US during the covid pandemic in March 2020. My postcard took 161 days to arrive to the US! Closely following was Antarctica (99 days from Arctowski, which has the excuse of being at the end of the world), then Cuba at 77 days.

All of these postcards in the last few years eventually arrived. The only postcard that never arrived was one I sent from Vatican City many years ago around 1998. During that time, I recall reading about a scam where shops would sell stamps, have people deposit them in their post box, and then remove the stamps to re-sell them. However, in all of the years of sending postcards, that was the only one that never arrived!

How much it cost

The most expensive postcard I bought was in Uganda, around £1.12. Besides Antarctica (Arctowski £4.73), the most expensive postage was Aqaba, Jordan at £3. I am not sure if that one counts, since I think the shop may have added an extra surcharge. Closely following these was Ecuador at £2.27.

The most difficult places to send postcards

The two countries that appear in the table with “not applicable” are Panama and El Salvador. Postcards were impossible to find while I was in Panama, though I searched in most stores I passed. Instead, I sent a printed picture in an envelope, and I was able to get a stamp. By far the most difficult was El Salvador. The two post offices we visited said that they had no stamps!