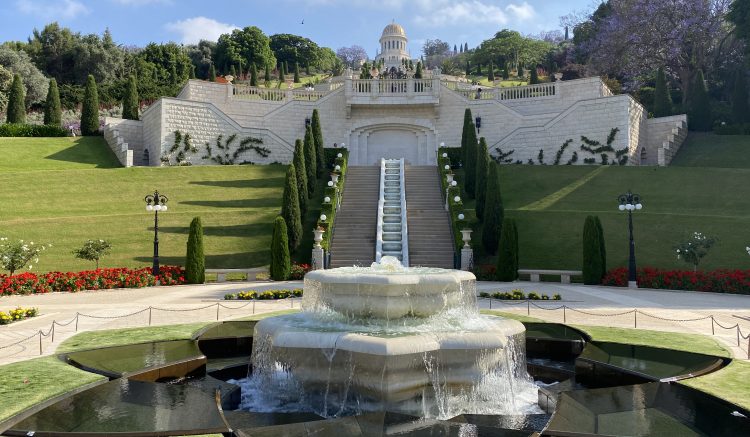 Haifa is a beautiful port city surrounded by hills. One of the prominent sights on the hill is the beautiful Bahá’í Gardens and Shrine. It’s easy to travel to Haifa from Tel Aviv by train, just one hour north along the coast. In fact, the journey is very scenic with some sea views along the way. I stopped by on the way from Akko back to Tel Aviv, so only had a few hours to walk around. Therefore, this guide for travel to Haifa is very short and there is more to explore in the area!

The only food I tried while in Haifa was the ice cream. I can highly recommend Cremerie de l’eclair for ice cream and cookies. I tried the pistachio flavour with pieces of pastry and honey. It was delicious and made even more decadent drizzled with extra pistachio sauce. The caramel cookies were also very tasty!

A: No, it is easy to walk around the city centre. Be prepared for some hills. To visit the Bahá’í Gardens, you have to book a guided tour online, otherwise you can only go to the top of the first set of stairs.

A: Yes most people speak English

A: Yes for the city centre, but it is hilly