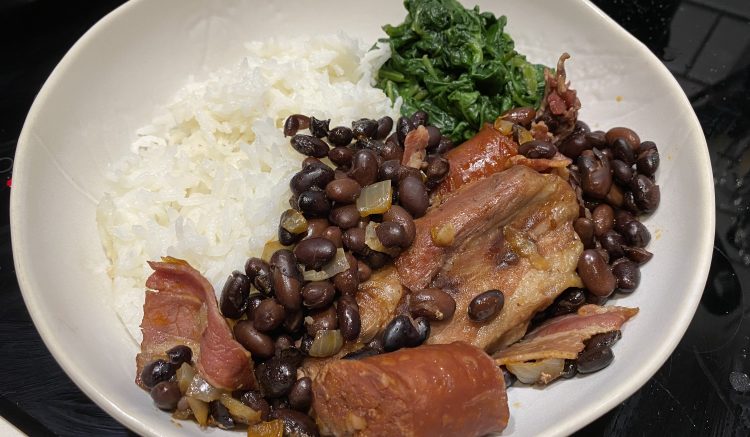 One of the very traditional dishes I have tried in Brazil is feijoada. It is a combination of seasoned black bean and meats, and is often served with rice and cassava powder (manioc). This recipe for feijoada is simplified and uses tinned black beans instead of dried. I viewed a number of recipes including this one from BBC Good Food. However, I adapted some of the ingredients and instructions to make it as easy as possible. One of my adaptations was to use the air fryer to pre-cook the bacon, instead of frying it. I think the final dish still tasted very good, if not totally authentic!

In a large saute pan, fry the bacon until crisp. Remove the bacon and set aside, keeping the oil in the pan. If there is not enough oil then add some olive oil. Next, in batches, sear the sausages and pork belly. Season each batch with salt and pepper.

Remove the meat and set aside. Then add the onion, garlic and chili to the pan. Add another tablespoon of olive oil. Season with salt and pepper and fry for 5 minutes or until soft.

Add the meats, bay leaves, white wine vinegar, and drained black beans to the pan. Then add just enough water to cover, about 500 ml. Bring to a boil, then reduce the heat to a low simmer. Cover and cook for at least an hour, or until the meat is tender. If there is too much liquid in the pot take the lid off and cook for another half hour.