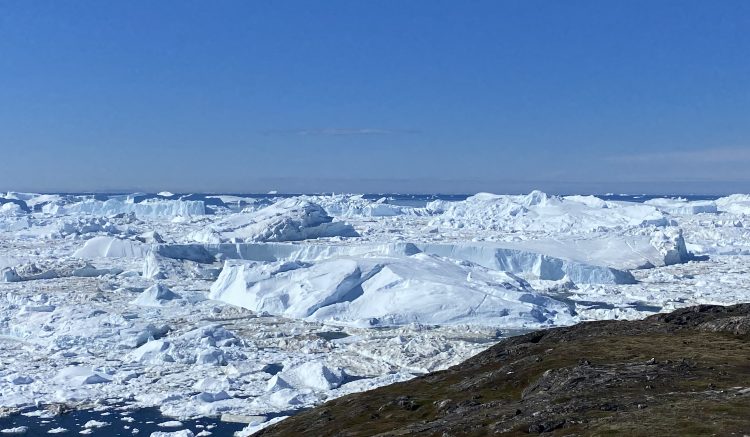 Travel to Ilulissat is a must if you are visiting Greenland! Ilulissat is a beautiful, special place where the icebergs flow from the ice cap to the sea. Therefore, the ice fjord is constantly changing and the sea is full of icebergs.

I spent nearly four wonderful days in Ilulissat and I am grateful for the time there. On the day I travelled from Kangerlussuaq to Ilulissat, the three other flights were cancelled due to technical issues with two planes. In addition, there was low fog in Ilulissat. We weren’t able to land at first and were circling above. The pilot announced we could wait for 15 minutes longer and if we couldn’t land then we would have to turn back. Luckily, we landed just a couple hours later than originally planned. Others were 2 or more days late.

The Arctic Friends/ Ilulissat Adventures guides were friendly and helpful. All of the excursions were excellent! There are options based on your interests, and you can mix and match each day. I went on the city tour with Merete as an introduction to the area. Although it’s a small enough town to find your way around, it’s interesting to learn more about the history and culture.

Later that same evening I joined the midnight tour to the ice fjord. I joined the tour a day earlier than planned, because the weather the next day was meant to be windy. The boat is like a fancy zodiac with saddle seats. I was in the front next to our captain, Jonas. The scenery was stunning along the ice fjord and we cruised around some of the larger icebergs. The midnight sun is also beautiful as the sun barely starts to set, giving off a unique light at the horizon. We were lucky with very calm water. I was also glad to be wearing a warm suit over my clothes, as the wind can be freezing when zooming along in the boat.

The next day, I went on a hike to Sermermiut, a settlement from more than 4000 years ago. There were four of us walking with our guide, Gunver. On the way we could see the sledding dogs, who live outside of the town centre. They’re chained from when they’re about one year old and start working. Before that, the puppies can roam free and we had some coming up to us to be pet. So cute!

We walked along a well-maintained boardwalk and over the roof of the new Icefjord Centre. I recommend doing this for the view. Although I didn’t go inside, I appreciated the architecture. Another couple had gone in and said it has some interesting information about the Ice fjord. The area is UNESCO protected and it’s easy to see why, as it’s pristine nature. The boardwalk path ends around the Sermermiut site. At the site, some markers show where the old turf houses were likely set up in the old settlement. What a view they have of the ice! One tip for this hike is to wear mosquito repellent and bring a mosquito head covering (cheap to buy at the supermarket). There are swarms of them!

On a side note, Gunver mentioned that a movie with Dev Patel had filmed near Sermermiut. Even after years, damage from the vehicles is still apparent as things take so long to regrow in the Arctic. That’s sad and I hope it won’t happen again, especially now that it’s a UNESCO site.

There are rocks to sit on and appreciate the view of the Icefjord. It’s constantly changing as ice gets pushed out, breaks off, and moves into the sea. After we had a short break, Gunver went back the same way with one guest. The other three of us kept hiking what is called the blue trail. It’s easy to follow as someone has painted rocks blue all along the way. In the middle, there’s an option to turn off onto a shorter red trail. I walked the whole blue trail and it’s easy to medium difficulty. There are just some parts where you need to climb over and balance on rocks.

The last organised activity I did was a boat tour called the Disko Bay explorer. In the morning, we headed north in the fancy zodiac boat with captain Jakob. At first, we stopped by the Oqaatsut settlement to drop off two hikers. It’s about a 6 hour hike from there to Ilulissat. Then we went up to a beautiful fjord area where fresh water from a lake runs into the sea. Jakob said it’s a good place to look for whales.

After that it was time to go back to Oqaatsut for lunch at H8 restaurant. It’s a very cute wooden building with a local food sampling plate for lunch. We had smoked reindeer, musk ox, lamb and halibut, shrimp, salad grown in Nuuk, and fresh bread. It was delicious and flavourful! We also walked around the settlement to see how this population of 40 lives. They’ve got no running water so use desalination or melting ice. There are a couple of community centres, and the church is also the school for the 5 children who live there. Most people are fishing for a living. We headed back to Ilulissat port, and when we arrived it looked very different to the morning. There were many more icebergs and pieces of ice in the water. Amazing how much the ice can change in a few hours.

On my last day, I had most of the day free until my ferry at 17:00. Therefore, I enjoyed wandering around the town. I went into some of the shops. There are food shops, outdoors shop, souvenir shops and some that seem to sell a bit of everything!

In the morning, I took a small hike to see the Ilulissat 275 year jubilee commemoration statue from 2016. It is also meant to be a nice coastal viewpoint. However, the weather was so foggy that I could not see very far.

Luckily, it was also the Greenland kayak championship while I was there. I watched three men in a kayak flipping competition. They had to flip over with their oars in different positions, many times. It was impressive and looked very cold! They were surrounded by large icebergs.

There was a great variety of food in Ilulissat. I can recommend a few places that I tried. The Inuit cafe is an interesting combination of local and Sri Lankan foods. I had a nicely-spiced Sri Lankan tuna spring roll, followed by a smoked halibut sandwich. They have wi-fi available for purchase.

Another casual restaurant is Cafe Iluliaq, a fusion between local and Thai food. As a bonus, it also serves local the local Iluliaq beer on tap. I had the fried halibut red Thai curry, which was delicious and unique. It was spiced but not spicy and the portion was big, including rice. You order at the counter and then find a table. It can get busy so if you see a free table, then you should claim it.

And, Cafennguaq is a casual cafe with great sandwiches, milkshakes, smoothies and more. I highly recommend the spicy chicken which has peanuts, peas and sweet corn in the mixture. The staff are very friendly and welcoming, and it seems a lot of local people hang out there.

The most remote place I ate lunch at was H8 at the Oqaatsut settlement of about 40 people. There was no menu, but they were able to adapt to one guy who only ate fish. I had a plate of smoked lamb, reindeer, muskox and halibut, shrimp, pickled onion, lettuce from Nuuk greenhouses and bread. It was delicious and such a cute wooden restaurant. We got to Oqaatsut by boat on the Disko bay tour. However, it is possible to walk back from there to Ilulissat in about 5-6 hours.

Several of the hotels, including Hvide Falk, offer Greenlandic buffets. They had snow crab, shrimp, musk ox, reindeer, whale, whale blubber, smoked salmon, smoked and steamed halibut, catfish, lumpfish roe, cowberry parfait and more. Everything was delicious except I’m not a fan of the strong taste of whale.

Finally, if you just want something simple, there are many supermarkets in the town. The two largest are Pisiffik and Brugseni on the main street. There are also Spar and Akiki shops.

A: You don’t need one to see the town, although it is a nice way to learn more about the history and culture. The trails are well-marked for hiking. For the boat excursions, you do need a guide.

A: Yes almost everyone speaks English

A: Yes the town itself is small and walkable