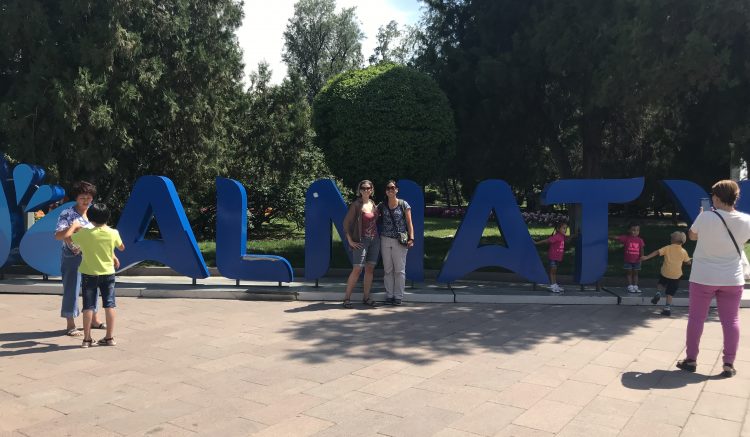 Previously, I posted a guide with general travel tips for visiting Kazakhstan. In this post, I will go into more depth with tips for travel to Almaty and surrounding areas. Almaty was the capital of what is now Kazakhstan between 1929 and 1997. It is located in the south of the country, not far from Kyrgyzstan. In contrast, the current capital is Nur-Sultan (formerly called Astana) far to the north.

At the start of my trip, I was lucky to explore for a day with Stef, a friend of friends who happened to be arriving the same day. How lucky was that?! And then after my side trip to Kyrgyzstan I explored the city and surrounding nature with my friend Alex, who had originally given me the reason to plan this trip. At the end of the trip was his friends’ wedding near Kokshetau.

If I had to describe the Kazakh food with one word I would say “variety”. We tried so many different dishes with different flavours. It’s difficult to characterise so I suggest to try as many foods as you can! I particularly loved the many different types of meat pies.

I tried to buy a pastry and it  was only 100 tenge, so about 20 pence. The bank machine had only given me huge bills so the cafe did not have enough change. I had to get smaller denominations of money at the hotel and larger restaurants.

Sensilyo coffee shop was friendly and had good drinks and wifi. Their panini was also very tasty. No one spoke English but they were very patient and had me use a translation app on their phone.

Cicek mangal is Turkish restaurant and I loved their meat pies and flat bread. Very friendly staff and they served us tea while we were waiting for the food.

Darejani Georgian restaurant was a bit more on the expensive side for Almaty, but still reasonable by London standards. Wonderful flavours and I recommend to try the traditional stuffed breads called khachapuri

Navat, a traditional Kazakh restaurant. We were welcomed with a cup of sour horse milk then ordered a variety of dishes. My favourite was the beef lagman noodles!

Another place with delicious food and ice cream was Paradise restaurant. We were so hungry after our visit to Kok Tobe, that I forgot to take any food photos.

A: No, not for going around the main city, but yes you would need a guide or driver if you want to go to see the surrounding nature spots like  Issyk Lake.

A: Not very many besides at the hotel. I had to use the Google Translate app in most restaurants and for the Uber and taxi drivers.

A: Yes, walking around the centre is safe during the day and the city centre is not very large. You can see the main squares and museums on foot.