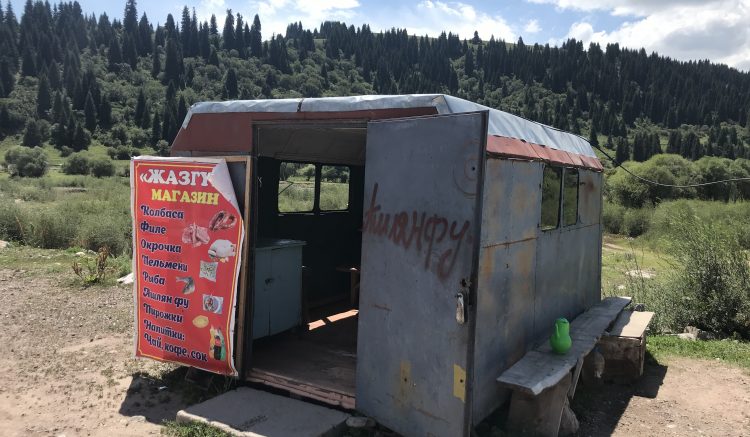 Language is no longer a major barrier for international travel. Is this a controversial statement? Perhaps, since I have heard many people use language as a reason that they could not to travel to certain countries. In contrast to this belief, I have two real examples of how Google Translate saved my trip. Google Translate enabled me to communicate with drivers, restaurants, my host family and others. In addition, I could read signs that were otherwise completely unintelligible to me.

Languages in Kazakhstan and Kyrgyzstan

In general, there are local languages in Kazakhstan (Kazakh) and Kyrgyzstan (Kyrgyz). Additionally, Russian is an official language of Kyrgyzstan and a very commonly spoken language in Kazakhstan. The majority of people we met spoke at least some Russian. A few drivers only spoke Kazakh, so that was more challenging. Communication in Russian was easier, as Russian is readily available on Google Translate. Kazakh and Kyrgyz are also available on Google Translate, but not in the offline version.

At most restaurants there was someone who could speak English, though not at smaller places or food stands. It was also fun to check the menu translations using Google Translate. Sometimes the translations were difficult to decipher even in English.

Another important consideration is whether you have your hotel name, address, and more written in the local language. If the alphabet is different, as with Kazakh, Kyrgyz and Russian, then drivers may not be able to read your notes.

Staying with my friend’s mother in Belgrade, Serbia

In Belgrade, Serbia, Google Translate saved my trip again. When I told my friend Nadezda that I would soon visit her home country, she volunteered her mother to host me. Unfortunately, my friend was not in the country at the time. Luckily, her mother warmly welcomed me into her home. We managed with sign language and a lot of smiles, and then I thought to use Google translate.

One morning, she was already out when I woke up. I had planned to leave a note to say I was going out to find a sim card. Then I used Google translate and wrote a note. She understood it, but she was slightly confused because I wrote in language relating to a man rather than a woman. That seems to be the default on Google Translate. She rang my friend’s cousin to see if he had left a note. Then he texted me, and explained to her. In the end, she thought it was very funny that I had written a note to her in Serbian but as a man!

After that, we communicated more with the translation and got to know each other better. She could also explain the different foods she was making for me and show me things around the city. Google Translate definitely enriched my visit. In addition, Google translate prevented me from getting lost on the public buses, since I could not understand any announcements!

I do not always have data available on my mobile phone while travelling, or a usable signal. Therefore, the offline version of Google Translate is very valuable! There are a lot of languages available, though unfortunately not Kazakh, Kyrgyz nor Serbian.

I have now learned it is usually pretty cheap to find a local sim card in most places. Sometimes the sim cards are even available at the airport. Usually you can easily buy data and pop the sim into your unlocked (important!) phone.

For the Google Translate camera function, you need to have local data allowance or roaming on your mobile phone. You can use the Google Translate camera function by simply choosing the languages to translate from and to, then pointing your camera at the text. This worked very well for translating signs, menus, brochures and more. It is especially valuable for languages with completely different alphabets to get some clue, instead of staring at uninterpretable symbols.

In conclusion, I would highly recommend Google Translate or a similar app for language translation when you travel to foreign countries. You may get by at times with English and hand signals. However, it enhances your travel experience to be able to communicate with locals. You also end up understanding much more about what is going on around you. Google Translate is definitely not perfect. At times, it may give a literal translation that makes the locals giggle. However, I never experienced that people found the translations offensive, and usually they understood the main point.

More to come in the future about my wonderful travel experiences in Kazakhstan, Kyrgyzstan and Serbia!