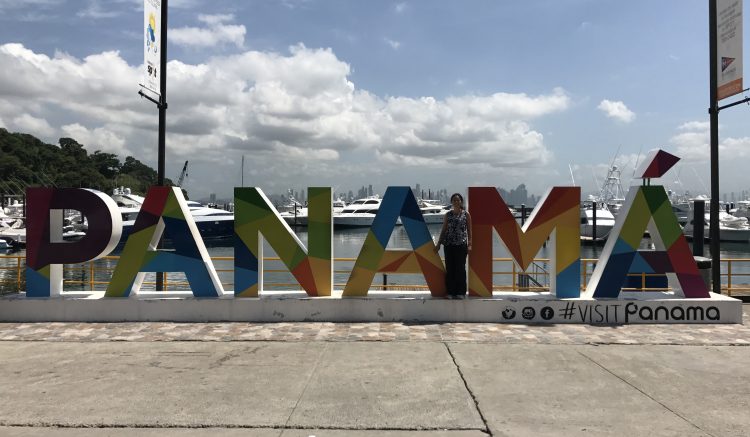 In 2017, I was able to travel to Panama for three days on the way to Costa Rica from London. Actually, it was more of a stopover, but during that short time I was able to visit Panama City, take a boat ride on the famous Panama Canal and do some wildlife exploration. In addition to the sightseeing, I enjoyed sampling the local cuisine.

Unfortunately, I had one scary incident where I fell into a hole in the sidewalk as I was walking back from a restaurant in the dark. I injured my knee quite badly but made it back to the hotel where I could ice it. Luckily, I was not too injured and got out of the hole, as I am not sure anyone would have found me for awhile. Subsequently, I learned that I should pay more attention to the sidewalk and use a flashlight when there are no streetlights!

This post is a guide for travel to Panama based on my experience. It was worth the visit and also realising a life-long wish to see the Panama Canal. In fact, it had been on my mind since I had first read about it as a child in history classes.

The main currency in Panama is the US dollar. There is also a local currency called the Balboa but at the time this was only given sometimes as change. The US dollar and Balboa were almost equivalent in 2017. Also, I checked in September 2021 and found that they are still almost the same value.

Restaurante Tinajas is a traditional restaurant with dinner and a show. I tried the Sancocho, a typical Panamanian chicken stew, and followed that with chicken, rice and plantains. Very delicious and flavourful food, and not spicy.

Tataki was a delicious Japanese restaurant. I had a mango frozen smoothie and chicken teriyaki with yakisoba.

I also tried the local fast food yeeros which are like kebabs or gyros. And I found a great taco place called Mordida de Burro

In the Balboa shopping centre there were some familiar American shops like Pinkberry, Nathan’s hot dogs and Coffee bean and tea leaf

A: No, not in general for Panama city as it is easy to walk around. For the Panama Canal tours you will need to join a tour with a boat. And also if you want to go see some wildlife then it is good to find a tour as well.

A: Yes at the hotels and tourist places, but not always at restaurants and with local people.

A: Yes, in general it felt safe and people were helpful. I was walking in a very local area of Panama City and a number of people asked if I needed help. I must have looked lost as I searched for a post office.

A: In Panama, it was very difficult both to find postcards. Instead of postcards I found some pages for kids to learn about the local animals etc and then I sent these in envelopes. Getting stamps from the post office was not possible but they could stamp the outgoing mail. See Sending Postcards from Abroad for details on cost and the time it took to reach the USA.