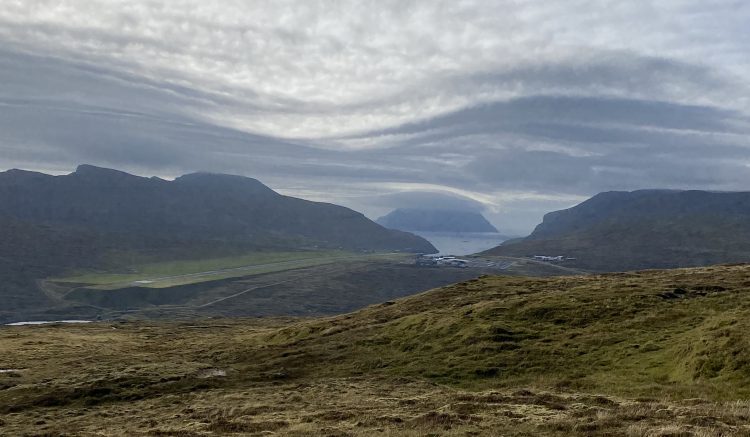 Where are the Faroe Islands? When I mentioned my plans to travel to the Faroe Islands in August 2022, most people asked this question. I had a vague idea they were in the Atlantic Ocean, but had to look at a map to see the exact location. They are volcanic islands located between Iceland and Scotland. It doesn’t look too far, but there are no direct flights from London. Therefore, I opted to travel via Copenhagen since I like visiting that city. I met other people who had come via Reykjavik, Edinburgh and various Norwegian cities.

The scenery in the Faroe islands is out of this world! Waterfalls and rivulets all over the place. Green hills, unusual rock formations, and lots of ocean views. One of the most impressive sights was the waterfall from the Lake above the Ocean. The water falls from the lake over rocks into the sea. Stunning! If you like hiking and nature, then this is a great place to visit before it becomes too touristy. The peace and quiet while experiencing the natural surroundings was an amazing experience. If you get the chance, book tours with locals as it supports the island community and you get to learn a lot!

The official currency of the Faroe Islands is the Danish Kroner. As of August 2022, one British pound was equal to 8.6 DKK. There are some bills that are specific to the Faroe Islands and they are marked with Føroyar

The weather in the Faroe islands makes it difficult to grow many fruits and vegetables. They can grow crops such as potatoes, crowberries, other root vegetables and rhubarb. Others are imported. In contrast, seafood is plentiful, as is lamb. There are sheep visible all around the islands. And the big circles in the ocean are salmon farms. Of course, the Faroe islands have also come under scrutiny by some for hunting and eating whales and dolphins. Whether one agrees or not, this was a way of life and survival in the islands in the past so it is part of the Faorese culture.

I had the opportunity to have some wonderful meals at restaurants and cafes during my visit. And for some quick meals, I just made sandwiches and salads, or had snacks. This was useful when going out hiking and also while staying near the airport, far from supermarkets and restaurants. I tried looking for bakeries and the only one I found was in Tórshavn. Unfortunately, I never got to try it since they are closed on Mondays and Tuesdays.

During the “See it all” tour, we stopped for lunch at Fiskastykkið in Sandavágur. Before our meal, our guide let us try some sliced potato topped with whale blubber and dried whale meat. It was okay but intensely fishy so it is not my favourite flavour. For my main lunch, I had the most delicious fish soup. It seemed to be flavoured with chives, parsley, cream, and a special herb oil. And it was filled with tender salmon, cod, potatoes and carrots. On the side we had homemade bread which was tasty and had a spongey texture.

In Tórshavn, I tried a few different places and I will review this in detail in the next post. The highlight was definitely the tasting menu at ROKS, the sister restaurant to the famous 2-Michelin star KOKS.

The places to eat on Vágar were much more limited than in the capital. One evening, I decided to hike from my hotel near the airport over the hill to Miðvágur. My aim was to hopefully find a Fish and Chips van that I saw on GoogleMaps. It is next to 2 Jatnavegur, Miðvágur 370. I was happy it was there and open, which made it worth the 1.5 hour hike. The owner is very friendly. He lives on another island and drives his van over in the evenings. Besides fish and chips, he also sells burgers and some other foods. The fish and chips were delicious! And he added extra onion rings and fried shrimp in the takeaway box. The batter reminds me of thinner fried chicken batter rather than British beer batter. Very crispy and tasty!

The nearest place to eat near the airport is in the village down near the port, Sørvágur. There are a few cafes there and also a supermarket. My first meal was at Cafe Zorva. I had the fish and chips, and the chef told me it was made with sole fillets. Very tasty and crispy, with thin batter. The chips were chunky and there was a side of cole slaw. I also tried a local dark beer, which went well with the meal. The atmosphere feels a bit like a bar and some people seemed to mainly be having beers. I enjoyed a Föroya Bjór dark classic with my meal. The view out the window of the harbour is beautiful.

While I was driving around the Vestmanna area, I passed the Faer Isle Distillery. They make gin, aquavit and other liquors there. The distillery was closed, but luckily I found the bottles at both the national liquor stores and the airport.

My last meal in Sørvágur was at Cafe Pollastova. It is a quaint restaurant with friendly service. I had the salmon fillet with new potatoes and vegetables. The salmon fillet was large and deliciously fresh. I was stuffed at the end so took a piece of carrot cake to go. The carrot cake is made freshly by the chef and is also worth trying if you have space!

A: You don’t need one but I highly recommend you take some tours with local guides. Firstly, it supports the people here on the islands. And secondly, you get an enriched experience to hear about life and history from the locals. You will learn a lot and be entertained!

A: Yes almost everyone speaks at least some English so you don’t really need a translation app. However, if you do use an app that does not have Faroese, then try Icelandic for a close translation…. usually

A: Yes, definitely. It is very safe on the islands. I would just recommend that you let someone know if you are planning to go on a long hike. There are often not many people around on the less touristy hiking trails.

A: It was possible to find postcards at the tourist shops in Torshavn and at the information booth at the airport. Other than that, I didn’t see many around. As for stamps, the opening hours for the few post offices were very short. Luckily, the airport information booth also sold stamps at the normal cost. See Sending Postcards from Abroad for details on cost and the time it took to reach the USA.