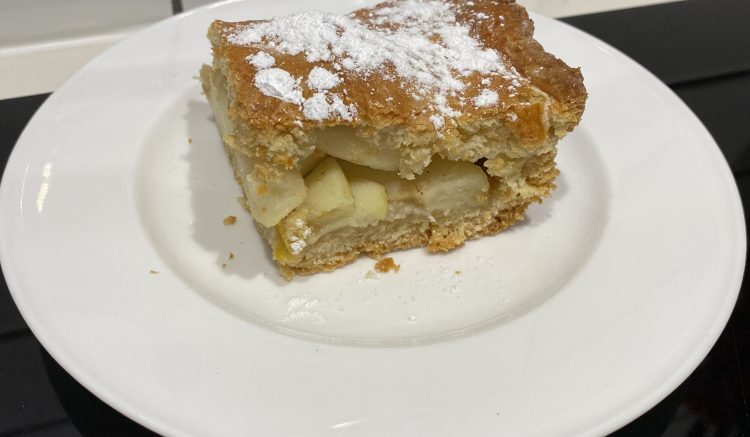 When I was visiting the Imperial War Museum London, I was moved by an exhibition about Holocaust survivors. One of the survivors, Tomi Komoly, wrote a cookbook with his grandmother’s Austro-Hungarian recipes. I bought this book and highly recommend it for its story and authenticity. This recipe for Hungarian apple pie is based on the one in the cookbook.

However, I changed a few ingredients and instructions. First, I added some fresh lemon juice for the apples to stop them getting brown. Next, I used a bigger pan so the crust would not be too thick. Personally, I prefer a thinner crust that is not too doughy. Also, I used ground almonds instead of breadcrumbs as I had that in the kitchen and I like an apple-almond combination. The cinnamon is considered optional in the original recipe, but I love cinnamon so added extra. Finally, I recommend serving this pie with a side of cream or ice cream.

This pie reminded me more of a cake since the crust has baking powder and rises more than a usual crust. My neighbour and friends did the taste-tasting and gave their approval.

First, in a large mixing bowl, rub together the flour, butter, sugar, soured cream, baking powder and salt. When the mixture is crumbly then mix in the beaten egg yolks and lemon. Add a little water if the dough is too hard. Mix well and then turn out onto a floured surface. Roll the dough out until it is about 15mm thick. Fold twice in each direction and then cover and place in the refrigerator for about 2 hours.

After 2 hours, remove the dough from the refrigerator and cut the dough into two pieces. Roll each piece to be slightly larger than the baking dish. Set one aside and cover it to prevent it from drying out.

Preheat the oven to 200C. In a 9x 13 inch baking dish, put one layer of dough. Top the dough with greaseproof paper and then weigh it down with baking beans. Bake for about 15 minutes, then uncover and bake for 5 more minutes. Remove from the oven and set aside to cool. Lower the heat to 180C

Peel the apples and cut them into thin slices. In a large bowl, toss them with the lemon juice as you are cutting, to prevent them turning brown.

Next, sprinkle the breadcrumbs or ground nuts on the cooked pastry. Then top the the sliced apples, sugar and cinnamon. Cover with the second sheet of pastry. Poke holes in the top with a fork and then brush with egg whites.

Put the pie into the oven and bake for about 40 minutes or until golden brown. Remove from the oven and let cool for 15 minutes before cutting it into pieces. Serve warm sprinkled with icing sugar. Side of cream, soured cream or ice cream is optional and goes well.