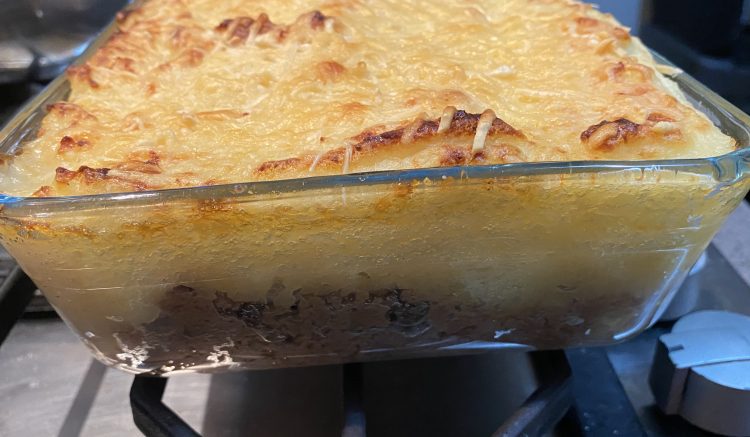 If someone asked me to describe Parmentier in British terms, I would say it is like the French version of a Shepherds’ pie. In general, there are similar ingredients including beef mince and mashed potato. However, the flavouring for the parmentier meat base is more subtle. In addition, there is an extra step to blend the meat mixture to make it smoother. And finally, there is a generous topping of cheese which is browned on top. This is a simple recipe for parmentier that we created while using leftover mashed potatoes.

Officially, the full name of this dish is Hachis Parmentier. This is because minced beef (or ground beef) is called steak haché in French. There are also other types of parmentier. In fact, I recall a particularly delicious variation with duck from Le Comptoir de la Gastronomie in Paris. I highly recommend a visit and as of April 202, I can see the duck parmentier on the menu. Funnily enough, the English translation they have used is Shepherd’s pie with duck!

In a large frying pan over medium heat, brown the minced beef and onions. Add the tomatoes and cook for a further 3 minutes. Transfer the mixture to a large glass mixing bowl. Use a hand blender to blend the mixture until it is relatively smooth, but not too much like paste. Set aside.

In a large pot, boil water with a pinch of salt. Add the potato chunks to the boiling water and boil for about 10 minutes or until soft when poked with a fork. Drain the water. Mash the potatoes then add the butter and milk. Keep mashing the potatoes until they are smooth and creamy. Add more milk if the potatoes are too thick (but do not add too much so that they become runny). Add salt and white pepper to taste.

In a glass baking dish about W 14 x L 19 x H 4.5 cm, add the meat mixture evenly on the bottom. Top with the mashed potatoes and smooth the top. Then sprinkle with cheese.

Bake on the top shelf of the oven for 20-30 minutes or until the top is golden brown. Serve hot.