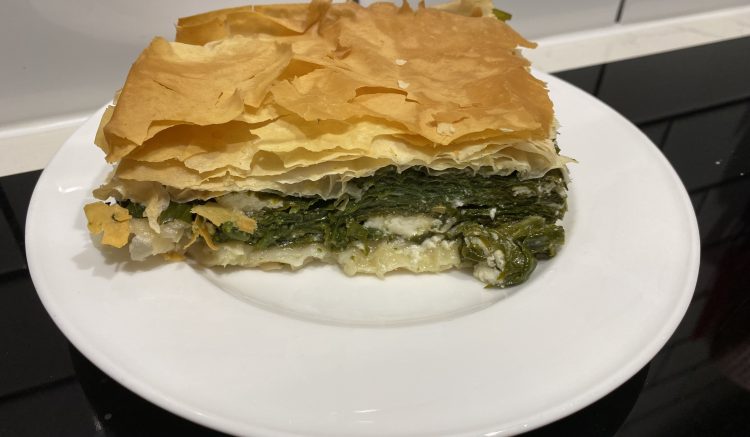 When I visited Tirana, one of my favourite meals was at Oda Restaurant. Oda is a traditional Albanian restaurant and I tried the spinach pie and a leg of lamb. Delicious! This recipe for spinach pie is adapted from Myalbanianfood.com. In Albanian, it is called Pite me Spinaq. The ingredients are simple and go well together. The flavours reminded me a lot of the pie I tried in Tirana.

I made three main modifications to the recipe. First, I used pre-made instead of homemade filo (or phyllo) pastry. Second, I used more feta cheese because I like the flavour and I wanted to use up the open package. Finally, I reduced the amount of spinach to 600 grams so that it would fit into the baking dish. Adding the water at the end if important so that the filo is not too crispy when you cut it. And covering the dish after adding water serves to steam the pie before serving it.

First, in a large mixing bowl, with your hands mix together the spinach, eggs and crumble in the cheese. By crunching your hands break up the spinach leafs ensuring all is covered with the egg and cheese. Set to one side.

In a 9×13 inch or slightly larger baking dish, layer 5-6 sheets of filo pastry on top of each other brushing a layer of olive oil after each one before the next one is place down. Once half the sheets are laid add the filling on top.

Repeat the layering until the remaining 5-6 sheets are on top of the filling – olive oil brushed on each one.

Put a thin layer of oil over the top.

Bake in the oven at 180 degrees for 1 hour or until golden brown.

Once removed from the oven, pour half a cup of water over the top and let it drip evenly over the edges. Cover the spinach pie with two tea towels and leave to stand for 1 hour before serving. Finally, cut and serve.