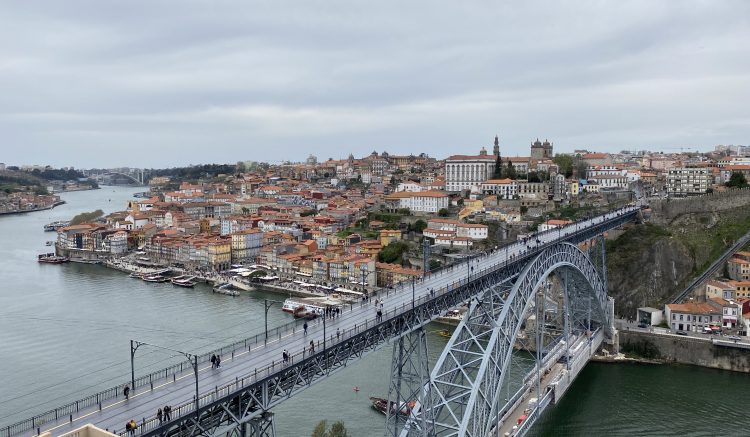 I had the opportunity to travel to Porto in March 2022, six years since my last visit to Portugal. In fact, this was my first fun, weekend trip after international travel started to resume with the easing of the pandemic. I was not disappointed with my first trip to Porto! The weather had been worrisome the few days before I arrived, with a major sandstorm from the Sahara. However, my three days there were sunny and warm.

What to see and do

For those who like to walk, it is safe to walk around and a great way to see the different parts of the city and enjoy the seaside, architecture, and the river. In fact, I walked about 60 kilometres in less than 3 days, even though I used the metro a number of times. The walk from Foz back to the city centre is a pleasant one along the coast with beach views the whole way. Also, the Luis I Bridge is wonderful to look at from the Ribeira or the opposite side of the river, and also fun to cross on the upper and lower routes. And the many miradouro sites (viewpoints) around the city are well worth the climb.

In addition to the sights, the food scene in Porto is thriving. There are more places with delicious pastries than I could try during the short time. However, I am not sure I could choose a favourite as they were all so good. There are casual places and Michelin-rated places to taste the different varieties of Portuguese food. And, taste the port and the Douro Valley wines!

Finally, one last wonderful memory of the trip was attending a concert by the Porto Symphonic Orchestra at Casa da Música. The orchestra played beautifully in the modern hall.

I hope to travel to Porto again to see a few more museums, enjoy the food and port, and relax on the beaches.

I tried many pastries, and mostly pasteis de nata from 7 different bakeries in 3 days. These included Manteigaria, Seara doce, Fabrica da Nata, Nata Sweet Nata, MixPao, Castro, and Confeitaria do Bolhão. MixPao is known specifically for their chocolate (and other flavour) filled croissants. My favourite was the Oreo croissant. Seara Doce and Confeitaria do Bolhão are both bakeries with lots of variety. Seara Doce is very local and friendly. The Confeitaria was chaotic and quite difficult to get served as there did not seem to be a queue system. The other four bakeries specialise only in pasteis de nata, the creamy Portuguese custard tarts. Although it is difficult to choose a favourite, I think I might have to go with Manteigaria because the pastry was crisp and the custard just the right firmness.

There were two main local chocolate shops and I sampled chocolates from both, Chocolataria equador and Arcadia. The most unique flavour I discovered was port chocolate. Yum! Also, at the supermarket there were many varieties of chocolate covered almonds by Vieira. They have really nice flavours including cinnamon.

Kopke Port house is noted as the oldest port wine house, founded in 1638. Unfortunately, I ran out of time to visit any of the port cellars with a tour, but I had a tasting at Kopke. I tried a tawny reserve port and found it very delicate and not too sweet. As an added bonus, it was served with chocolates.

Café Santiago is a Porto institution known for the francesinha sandwich. Luckily, it was also located on the same street as my hotel, so it was my afternoon snack. Although my friend warned me that it is very heavy, I was unprepared for how full I would be after eating most of it. The sandwich is filled with steak, sausage, ham and cheese, then toasted with cheese on top and smothered in a spicy beer sauce. It’s also served with a generous portion of fries. I’ve never tasted anything like it and it was amazing!

Brasão Aliados has several locations and all of them are very popular. I suggest to book a table in advance, or you may need to wait for awhile in a queue outside. The octopus salad starter was fresh and delicious, mixed with peppers and onion. After that, I enjoyed a traditional dish called pica-pau, which is a mix of meat and sausage in a spicy beer sauce. The dish is covered with pickled vegetables and served with bread. Another very filling but delicious meal. Probably I should have eaten francesinha and pica-pau on different days!

In Diferente is a Michelin Bib Gourmande restaurant located in Foz, near to the coast. It is an elegant restaurant and well-decorated. On the day I was there, it was very noisy with kids. Later, the restaurant explained that it was Father’s day and that they always allow children. The menu contains up-market versions of Portuguese classics. I thoroughly enjoyed their versions of cod cakes, sea bass and Pão de Ló.

The 14-course tasting menu at Le Monument was a wonderful dining experience that took more than 3 hours! It is difficult to describe each dish in a few words so I refer you to the website for the menu. Complementing the dishes was a wine pairing of Portuguese wines. And the meal was finished with a herbal infusion and petit-fours.

Finally, my last main meal in Porto was sushi from Cais 35 along the Ribeira. They seemed surprised that I asked for a takeway but they were able to accommodate. The sashimi portions were very generous and the spicy tuna roll variation was inventive.

A: No, the city is easily walkable. Most of the places of interest are on GoogleMaps and/or on travel guides

A: Most people in the city do speak English, but it is also useful to have a translator app to hand such as GoogleTranslate. Every restaurant I ate at had English translations on the menu.

A: Yes, but be prepared to do a lot of climbing, as it is a hilly city. However, the bus and metro system is also very good so you can make use of that.