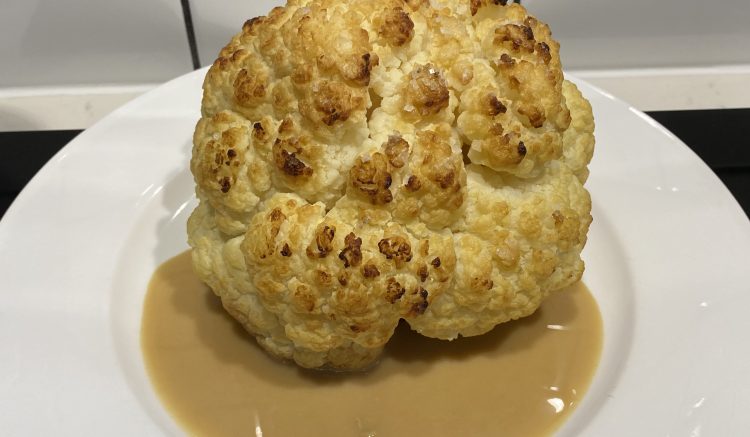 When I was young, I used to try my hardest to avoid eating cauliflower. Usually, it was served steamed and a bit mushy. There didn’t seem to be much flavour and I disliked the texture. Luckily, I gave it another try while in Israel. Now it is one of my favourite Israeli dishes! The recipe for Eyal Shani cauliflower is delicious and simple! Although the cauliflower is parboiled, the cooking is finished in the oven. So, the cauliflower has a grilled flavour and it crispy on the outside and soft, but not mushy, inside.

You really only need three ingredients, the cauliflower, oil and salt. The tahini is nice as a side sauce, but the cauliflower has a lot of flavour on its own. Groundnut oil is preferred because it has a high smoking point. Alternatively, you can use vegetable oil but you should have good ventilation in the kitchen as it may smoke.

Are you wondering what Eyal Shani means? It is the name of a chef who has many restaurants in Israel and a few other countries, including London!

First, in a large pot of boiling water, add 1/2 Tbsp salt. Submerge the cauliflower in the water with the stem facing up & cover. Cook for 12 minutes then remove from heat.

Next, carefully remove the cauliflower and place it stem-side down on a foil-lined baking sheet. Drizzle with oil and sprinkle with the remaining sea salt.

Put into the hot oven and bake for about 25 – 30 minutes or until browned on top. If the cauliflower is not browned after 30 minutes, turn the broiler on. Leave the door slightly open, and broil the cauliflower for 4-5 minutes. Serve hot with tahini.