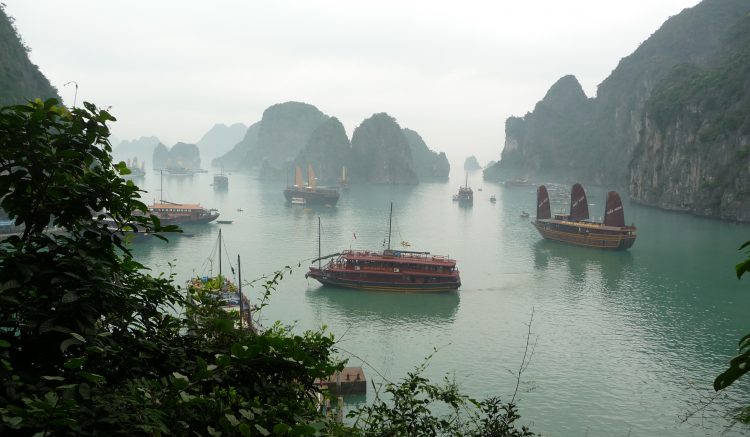 In January 2010, I moved to Vietnam for six months to work for Save the Children based in Hanoi. This move was part of a work programme, and my company loaned me to the NGO. I thought this was a great way to travel to Vietnam and the surrounding countries, while at the same time volunteering in public health. The country is rich in history, culture, cuisine, and natural beauty. It is interesting to see the contrast of the French-influenced Hanoi and the more American-influenced Ho Chi Minh City. Also, I was lucky enough to travel to some very rural areas for work field trips. Those are not included in the guide since I went with work transport and can’t recommend how to make a tourist visit. However, I have added a few photos to share my experience of village life.

This guide is about general travel to Vietnam. I will write specific posts for Hanoi, Ho Chi Minh City, Hue and Hoi An. Although some information may be dated, my hope is that the guide will give you some general tips and ideas for what to search for to plan your own trip.

The variety of food in Vietnam is amazing! Even the spring rolls have several distinct versions. The Hue version is especially impressive with a type of shredded pastry wrapper. They are often served on toothpicks attached to a pineapple.

One of the typical, and very affordable meals, is a noodle soup called Pho. This can be found as street food and in restaurants. It’s usually steaming hot and topped with fresh herbs. It’s one of my local favourites, and versions of it can now be found in many countries.

In Hanoi, a regional specialty is cha ca, which is a dill and turmeric fish. It’s usually prepared at the table in front of the guests, and served with noodles, peanuts, and fresh herbs. Cha Ca Thanh long was the place to go in Hanoi.

Of course, you should try the banh mi sandwiches. These are a fusion of the French and Vietnamese cuisines, though the “baguette” is a Vietnamese version. The usual fillings included grilled pork or vegetables, but there are many variations.

Vietnamese cuisine includes all parts of animals including the innards. There are also some foods that are not common in western cuisine such as crickets, dog, snake, and worms.

Unfortunately, often times the food did not agree with me and I was ill. I am still not sure if it was the water used to wash vegetables or old oil or something else. At times, I had to take a break and eat tinned food. However, the Vietnamese food was so tasty, I would always try again!

If you are brave then also try the Vietnamese civet coffee. The beans are eaten and pooped by civets, and are meant to have a milder taste. In general, coffee in Vietnam is strong, and filtered through a metal cup with a perforated bottom.

Note that vegetarians and people with dietary restrictions may have difficulty finding out exact ingredients in foods. Using a translator app will help. However, some of the broths for soup may contain fish sauce or meat stock. And my friend who is allergic to onions and garlic had a very hard time to avoid these even when she let places know.

I will give some more specific food recommendations in the individual city guides.

A: You don’t need one for the main cities, but it may be nice to hear the history of the area from a local. To get to some of the sights like Ha Long bay, Cu Chi tunnels, etc then it may be useful to book a tour for the transport and guide in English.

A: Some people do and especially more of the young people. The south of Vietnam also tended to have more English speakers than the north, where the French influence was stronger.

A: Yes, in general it is a safe country though do watch out for pickpockets. Even my local friends had their phones and wallets stolen, especially on public transport.

A: It is easy to find postcards and post offices in the larger cities. See Sending Postcards from Abroad for details on cost and the time it took to reach the USA.