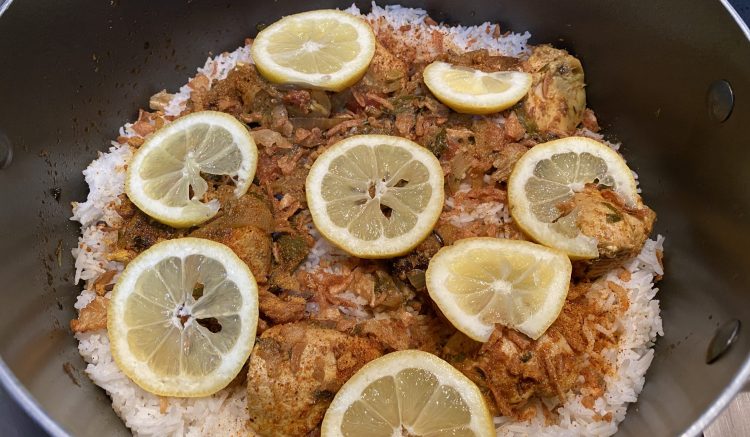 This recipe for Chicken Biryani comes from Food Fusion and was recommended by my friend Sindhiya from Pakistan. When I first asked Sindhiya for a Pakistani recipe, she said that I could buy a ready-made spice packet for biryani. But I wanted to try something from “scratch” so she sent me the link to this video. Now I understand why she suggested using the spice packet, because this recipe requires a huge number of ingredients! In any case, I could not get away from the biryani masala spice packet, as that is one of the last ingredients to sprinkle on the top. Was it worth it? Yes it was worth the work! It was fragrant and perfectly spiced. It also made a huge portion which froze well.

I have never been to Pakistan, though I have visited nearby India. However, I do not have any idea how the flavours may differ between countries for dishes with similar names. And I have only ever tried chicken biryani at the Indian restaurants around London, so it was interesting to find out how much work goes into making it. In my cupboard, I found most of the ingredients, but I needed to buy a few extra spices. Luckily in London it is easy to find all of these ingredients. One thing I will comment on is that you need to be careful about eating the whole peppercorns. They can be quite spicy!

Place the lemon slices on top. Then layer the remaining rice on top.
Mix food colouring with the 2 Tbsp water. Then drizzle colouring over the top in a large circle. Sprinkle with more fried onions. Cover and steam on low flame for 10-12 minutes. Mix slightly and then serve hot.