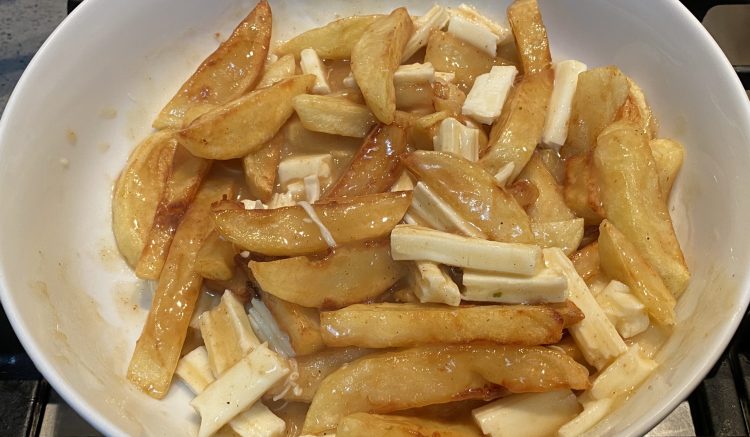 When I asked my Canadian friend Michelle what would be a typical and representative food for Canada, she suggested poutine. Originally from Quebec, this dish has been very popular in Canada for decades. However, the creator is not known, as far as I could find on the internet. Although this dish sounds very simple, the few key ingredients combine for a tasty food that is hard to stop eating. The key ingredients are potatoes, cheese and gravy. Here is an easy recipe for Canadian poutine that you can make at home.

The only time-consuming part is frying the potatoes- twice! And yes, it is important to fry them twice so they get extra crispy and brown. In addition to the double-fry method, I did try air-frying some potatoes, but my French taste-tester at home said that the double-fried potatoes were far superior!

The gravy is simple and I recommend the Knorr bouillon cubes for great flavour and not too much saltiness. This is an honest recommendation with no sponsorship! And for the cheese curds, I used a Turkish string cheese torn into pieces. It is similar to mozzarella and easier to find in London than cheese curds. Although it is not impossible to find cheese curds, you would usually have to special order them or travel to a specialty shop.

Finally, is poutine a snack or is it a main dish? I am not really sure but I think it could be either. We had it for dinner with a side of salad to add some green healthiness.

First, prepare the gravy. In a small dish, dissolve the cornstarch in the water and set aside.
In a large saucepan, melt the butter over medium-low heat. Make a roux by adding the flour and stirring regularly for about 5 minutes, until golden brown.
Add the beef and chicken broth and bring to a boil, stirring with a whisk. Lower heat to a simmer. Stir in about half of the cornstarch mixture and simmer, while stirring, for two minutes. If the gravy needs to be thicker, add more of the cornstarch mixture in small increments, and stir until it is thickened. Season with pepper. Set aside and either keep warm or re-heat when the fries are ready.

Next, prepare the fries. Cut the potatoes and cut into 3/4 cm-thick sticks, as consistently as possible. Place into a large bowl and cover completely with cold water. Allow to stand at least one hour. When ready to cook, heat the oil in a deep cooking pot to medium-high heat.
Remove the potatoes from the water and place onto paper towels or a clean dish towel to remove the excess moisture.
Test that the oil is hot by dipping potato into the oil. It should start sizzling immediately. Add the fries to the hot oil and cook for 6-8 minutes, until the potatoes are starting to cook but are not yet browned. Remove potatoes from oil and drain on a wire rack. Increase the oil temperature to High. Then return the potatoes to the frying pan and cook until potatoes are golden brown. Drain on paper towels placed on the wire rack.

Assemble the poutine by putting the fries in a large serving bowl. Add a ladle of hot poutine gravy to the bowl and gently toss the fries in the gravy. Add more gravy to your preferred amount. Then add the cheese curds and toss with the hot fries and gravy. Add freshly ground pepper (I like to use a lot!). Serve immediately. If you are not sure that you will eat it all, make it in batches as it stores better when the ingredients are separate.