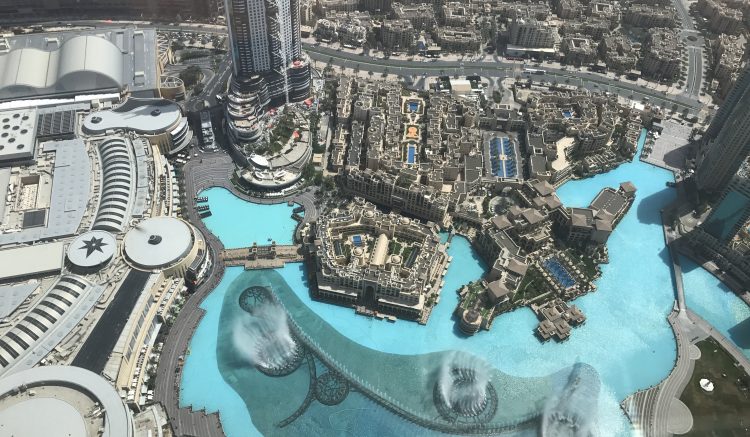 When I first imagined travel to Dubai, I thought of skyscrapers and giant malls. These are definitely present, but what I did not expect was the expanse of desert sand just outside of the city. Dubai is an international flight hub, and the largest city in the UAE, United Arab Emirates.

I enjoyed a few days exploring the city and was impressed by the buildings and layout of the city. It is an interesting mix of very modern architecture and more traditional souks (markets) and boats on the Creek. Even in March, the weather was very hot and sunny. While I was walking around the city, sweating, many taxis passed by honking and asking if I needed a ride. However, I was persistent in walking so I could enjoy the city views!

This is a short guide on travel to Dubai based on my 5 days there in 2017, which may seem a long time ago in an ever-changing city. In fact, I have noticed when looking at GoogleMaps recently that a lot of restaurants have changed since then. So, I will share my experience, but you may need to look for some updated food recommendations!

As I mentioned in the UAE post, I am not entirely sure what is considered the local cuisine. I asked some friends and they said generally Middle Eastern. On the desert safari, the barbecue dinner was advertised as “traditional”. It included tasty grilled meat, salads and pitta bread.

Another Middle Eastern meal I enjoyed was at Milas in the Dubail Mall. Sadly, this location is closed permanently, though it still seems to exist in Abu Dhabi. The pitta bread arrived hot and puffed, and it was delicious. The ingredients were so fresh and flavourful. I loved the tabbouleh salad made with parsley, tomato, bulgur wheat, garlic and lemon.

The breakfast at the hotel was an interesting mix of western food, Chinese food, and Middle Eastern breads, beans and salads.

One unusual food I tried was the camel milk ice cream. I hesitated to try it as it did not immediately sound very appetising. However, curiosity got the best of me and I tried some. The texture was so smooth and creamy and the flavour was similar to cow’s milk. I’d definitely recommend it!

In addition to the local food, I found a lot of delicious and authentic Indian food. There were many Indian restaurants, fast food stops, and dessert shops. One that I tried is still open, Bombay Bites. They serve a lot of vegetarian snack foods and the prices are very reasonable. It was filled with Indian people, and one had to eat quickly to make space.

Finally, my splurge of the trip was to dine at Atmosphere restaurant on the 122nd floor of the Burj Khalifa. Of course, the view was stunning in every direction. It was fun to watch the Dubai fountain show below, as it looked so small. And in the distance, one could see sand in the desert around the city.

The food was beautifully presented and the service was friendly and efficient, not pretentious. Also, the cost was not too high considering the quality and location. As on 2023, it looks like Atmosphere is undergoing a transformation. I hope it will re-open again soon!

A: No, it is easy to find your way around the city

A: Yes most people speak English

A: In the centre of the city, it is walkable. However, you don’t see many people walking very far because the weather is very hot

Go to the UAE