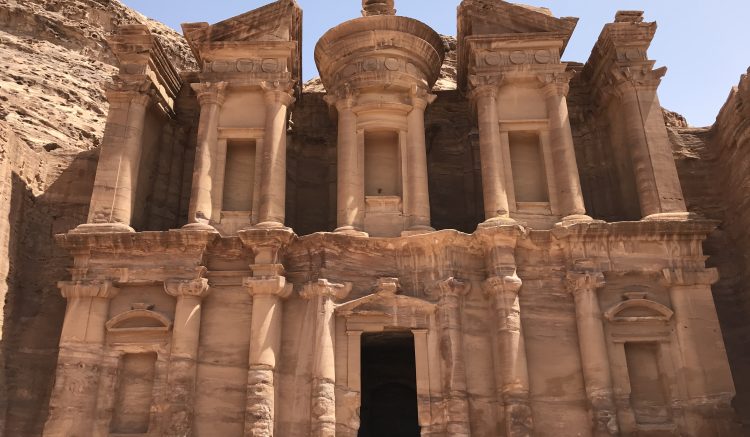 In 2018, I travelled to Israel for my friends’ wedding and I had the opportunity to extend my stay. Luckily, one of my side trips was a 3-day whirlwind trip to Jordan. For many years, I had wanted to visit Petra. However, I knew very little about the history and other sights before my travel to Jordan. Due to the limited time and also the complications of arranging travel, I chose a tour company called Tourist Israel. Unfortunately, I cannot say that I would recommend this company.

To start with, we all waited in the dark from 3:50 until 7:50 in the morning outside of a hotel to be picked up. No one answered the 24-hour emergency help line until after 6AM… but 15 of the 19 of us stuck it out and finally boarded a bus around 8AM. There was also quite a lot of disorganisation and lack of information throughout the trip. However, despite the big hiccup at the start of the tour and other smaller glitches, it was a wonderful and unforgettable experience to travel to Jordan. It was made even better by the amazing tour members and our guide Sam! In fact, I still have two friends from the tour who I keep in touch with.

This post is a brief guide to visiting some main sights in Jordan via a tour. I hope TripAdvisor or another website can recommend a reliable company!

In Jordan the currency is the Jordanian dinar. We also needed dollars to cross from Israel to Jordan, and Israeli shekels for the shuttle at the border.

We had some of the most amazing falafel pittas that I have ever eaten, just from small restaurants on the side of the road. However, I have no idea what they were called!

After visiting Petra, we had a buffet lunch at the Sandstone restaurant. The food was good and there was a lot of variety. I ate hummus, pitta, yoghurt and salad, then meatballs, chicken rice and stewed vegetables. It was quite touristy but we were tourists and it had a lot of space.

At the Wadi Rum Bedouin camp we had fun watching them dig out dinner out of the ground. It had been cooking there in hot coals until we arrived. The roasted lamb and potatoes were flavourful and tender. Additionally, there was hummus, salad, and sweet coconut cake soaked in honey. Delicious! The next day we had breakfast with an amazing view of the red desert and rocks

A: No it is not completely necessary, but it seems like a good idea. For example, they know some tips and tricks for crossing the borders and visiting the sights. They also arrange safe transport.

A: Yes at the hotels and tourist destinations. I did not really go into any rural areas. My friend from Amman tells me most people in the city speak English.

A: I am sure it is possible but I quite enjoyed the experience with a group. In addition, the tour made it easier to get around between the sights, which are far apart.

A: Despite being a tourist destination, it was not easy to send postcards. It was possible to find them at a shop in Aqaba. And I also saw people selling them to tourists around Petra. However, stamps were much more difficult to find. See Sending Postcards from Abroad for details on cost and the time it took to reach the USA.