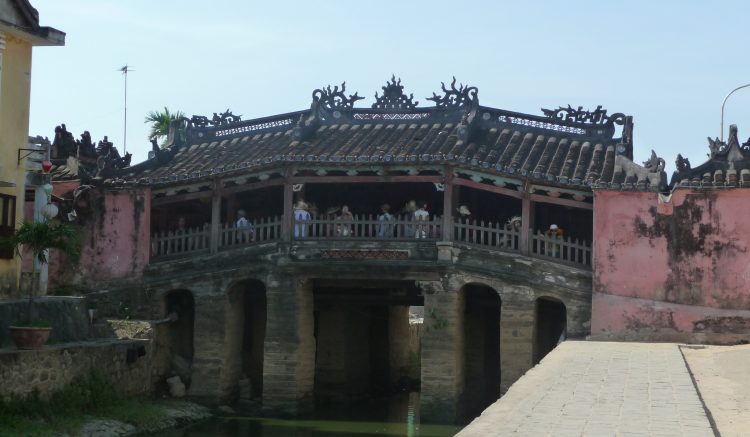 While I was living in Hanoi, my local friends said that visiting Hoi An is a must in Vietnam. It is located on the east coast in the middle of Vietnam and is known for its traditional architecture. One of the most iconic sights is the Japanese bridge at Cau Temple. From Hanoi, one can travel to Hoi An by bus, train or plane. I opted for the plane so that I could make the most of my time sightseeing between work. Hoi An is also known for its fabric, so if you have time then you can get some clothes made by local tailors.

If you fly into Da Nang, and even if you don’t, I recommend taking some time to visit the Marble Mountains and nearby beaches. The views from the mountains are stunning all around, and there are some interesting temples and caves to explore. Also nearby, and easily booked via a tour is My Son, a Hindu temple area. It reminded me of a smaller version of Angkor Wat in Cambodia. The ruins are beautiful, and parts of it are from the 4th century!

As with all of Vietnam, there is a great variety of food to try in Hoi An. On the fast food side, the banh mi sandwich is a great choice. It usually has meat and pickled vegetables inside a baguette. The baguette is French-influenced but I find the Vietnamese version a lot fluffier.

The highlight of my culinary experience in Ha Noi was taking a cooking course at Red Bridge Cooking School. It is also a restaurant in case you don’t feel like cooking.

Of course we made spring rolls, a Vietnamese favourite. We also made a beef salad. It was interesting because along with it we had poppadums (Indian food). The restaurant made us some extra dishes including rice noodles with meat, and wontons. It was a delicious feast!

To wash the food down, I tried a tasty Vietnamese beer called Larue. It was first brewed in 1909 by a Frenchman named Victor Larue. Now, I think the brand is owned by Heineken. Usually I don’t drink beer but this was light and cold so I enjoyed it with the flavourful food.

A: No, it is a small place so easy to find your way around. Also there are little signs to direct people to the most popular sights

A: As with most of Vietnam, some people speak English but not the majority so it is best to bring a translation app just in case.

A: Yes it is very walkable