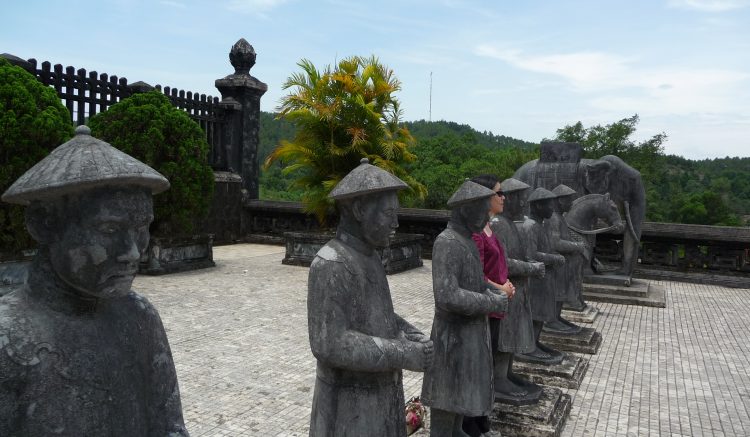 My cousin, Chris, visited me while I was living in Vietnam. He went to some places around Hanoi while I was working. And we were able to travel to Hue for a long weekend to explore the Imperial City. The main city is beautiful and historic. One can see the Citadel and several emperors’ tombs. Running through Hue is the scenic Perfume river. There’s enough to see in Hue for a couple of days. And we took a one day tour towards the north of Hue to see the interesting Vinh Moc Tunnels and a few other sights.

One of the funny experiences we had was to get a massage at the Blind Association of Thua Thien Hue. We decided to support the organisation, and the prices were quite cheap. However, the massage was unlike anything we had ever experienced or expected. It was not really relaxing but it was unique. Afterwards, we were both giggling because we had been whacked on the forehead several times, and it felt like they were slapping us. However, I would still recommend it because it is something unique to try and it supports the association.

As with all of Vietnam, there was some excellent food to try in Hue. Hue is well known for a specific type of spring roll that has a shredded pastry wrapper. I forgot to take a photo in Hue but we had similar Hue-style spring rolls in Hanoi as well.

The market was fun to explore and we found some unusual fruits including jackfruit and jungle pineapple. Lots of the fruits seem to have spiky skins here!

Our favourite meal was at Restaurant La Carambole. I loved the shrimp and pork taco with peanut sauce. And my cousin ordered rice paste with shrimp in banana leaves. That reminded me a lot of Chinese dim sum.

There were not too many restaurants around when I went to Hue. I can see that they are still mostly concentrated on the south side of the river, across from the Citadel. Luckily, La Carambole is still there!

A: No, not to walk around the main city centre and Imperial Palace. However, if you want to visit the nearby tunnels and villages then it is better to book a tour with transport.

A: As with most of Vietnam, some people speak English but not the majority so it is best to bring a translation app just in case.

A: Yes the main city is walkable though a taxi is needed to visit some of the tombs that are further out