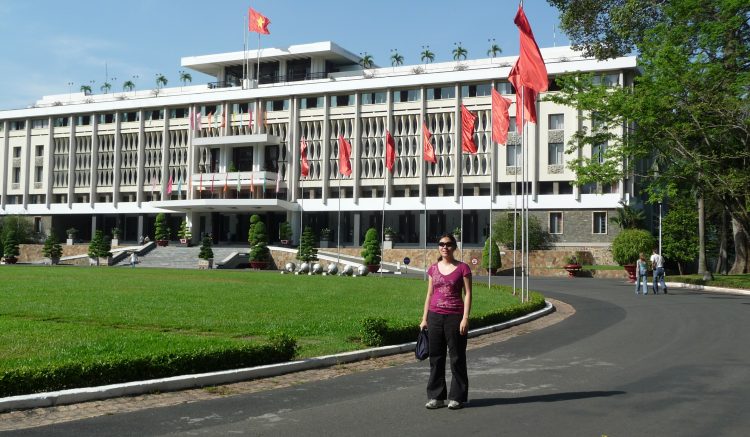 I had a chance to travel to Ho Chi Minh City while on a field trip to some villages along the Mekong River in Vinh Long. The city itself is quite large, busy and cosmopolitan. I spent some time walking and taking taxis around to see a few city sights. I also booked a day tour to see the nearby Cao Dai Temple and Cu Chi Tunnels. That was very interesting and worth it! I tried shooting a gun there and didn’t hit anything. And one girl tried the original tunnel and got stuck because her hips were too wide. After that, no one else dared to try jumping in it. We waited for the tourist-sized tunnels.

Ho Chi Minh City used to be called Saigon, which was the capital of South Vietnam. The name was changed in 1975 when the North defeated the South in the Vietnam war. Ho Chi Minh was the communist prime minister at the time, and he is still celebrated by many Vietnamese people. His Mausoleum can be found in Hanoi

While in Ho Chi Minh City, I ate simply. Mostly I had Pho noodles and spring rolls. Unfortunately, I can’t find the Pho place on GoogleMaps anymore. It was right next to my hotel and was called Sen Hong.

The Binh Tay Market was full of interesting foods and other things. It is in the Chinatown area. One of my favourite things to try was the fresh fruit, especially anything that could be peeled. Usually when I buy exotic fruits at home in London, it’s in a tin or in pieces. It was great to see jackfruit and other fruits growing on the trees in the nearby countryside.

On a funny note, there were signs at many hotels that said eating durian fruit inside is banned. This is because the fruit has a very pungent smell. It is hard to describe, but some have compared it to raw sewage. It’s not my favourite but most locals love it!

A: No it is easy to find your way around the city to see the main sights. You may want to book tours to see surrounding places such as Cao Dai Temple and the Cu Chi Tunnels.

A: Some speak English but it is a good idea to have a translation app such as GoogleTranslate

A: There are parts of the city that are walkable but it is usually hot and humid. Taxis are cheap if you do not want to walk