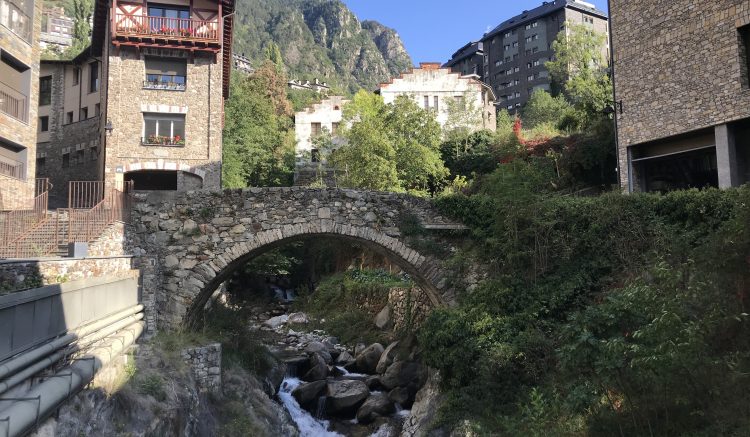 In September 2019, I was in Nice, France for a work conference and I had the following weekend available. Therefore, I decided to take a detour on the way home to London via Toulouse and Andorra. I spent a few hours in Toulouse due to a missed bus, and then I stayed two days in Andorra. I think that was almost enough time to see the city and natural highlights of the mountainous principality. In fact, I missed out on a few of the museums but they were not open while I was there.

Andorra la Vella is definitely a walkable city with a good mix of art, architecture and nature. There are some natural hot springs and accompanying spas. Additionally, I highly recommend eating at Kokosnot, an impressive and friendly fine dining restaurant.

This is a brief guide to travel to Andorra based on my short and enjoyable visit.

The currency in Andorra is the Euro.

Kokosnot was my favourite dining experience of the Andorra visit. First, I had two beautifully-presented croquetas, one with mussel and squid ink and the other with leek and truffle. Next, the second starter was a cassoulet with homemade local sausage and local bacon called cansalada. The sommelier recommended a cotes du Rhône, which was nice, smooth and fruity. The main was black cod cooked in a white garlic sauce, green apple tartare, caviar de truffe and fresh coconut. Delicious flavour & texture!

In between the dishes I was served a vial of green apple and fresh bay leaf. For dessert, I had a passion fruit flan smoked on the grill, with thyme ice cream and smoked coconut foam. Finally, the petit fours included a cardamom marshmallow, coconut truffle, masala cookie with more than 30 spices, caramel wrapped in edible rice paper and a dark chocolate truffle. All very delicious and unique flavours. The friendly owner told me that Kokosnot means coconut in Scandinavia, and she called her grandfather Koko so it’s named for him.

I dined at Chef’s table in the Embassy Hotel and enjoyed a delicious steak and salad. Sadly, this seems to be permanently closed. The restaurant was divided like a mini market place and had a lot of market-fresh food.

There were many patisseries and chocolateries in the city centre. The cakes from Art i Pa 2 Riberaygua were delicious and filling.

The breakfast buffet at the Mercure Hotel was really good with a lot of variety.

At home, I made a traditional dish from Andorra called Trinxat, though I didn’t get to try this during my visit.

A: No, it is easy to find your way around the city and even for the hiking areas in the hills. There are many signs with directions around the city, and GoogleMaps is mostly accurate. Some locations were a little off from the map especially on the outskirts of the main city centre.

A: About half of the people I met spoke English. For example, the Plaza hotel spa receptionist, the bus drivers, and some of the restaurant staff only spoke Spanish and/or French. It’s probably helpful to have Google Translate to hand if you do not speak Spanish or French.

A: Yes it felt very safe and people were friendly.

Q: How easy is it to send postcards? It was not easy to find postcards for sale, but the Tourism office was very kind and gave me some for free. At the post office, it was easy to buy stamps.