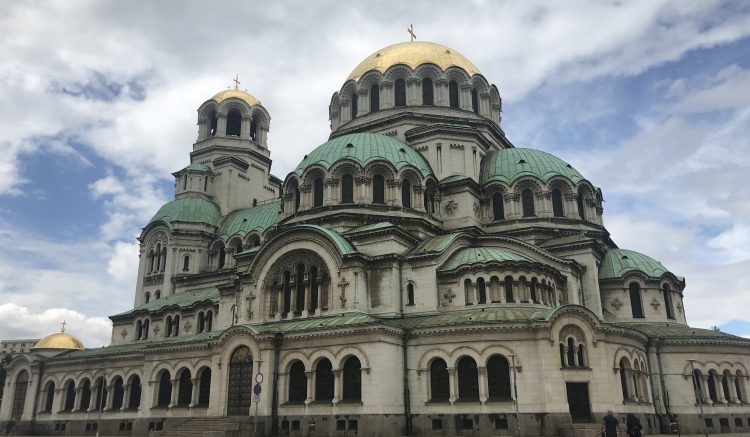 The first stop on my May 2018 tour of the Balkans was Sofia, Bulgaria. I had wanted to travel to Bulgaria for a long time, to see the capital and to try the local food. A good friend in high school came from Bulgaria and I remember her making the best salads! Of course, on my first night there I ordered a nice, fresh salad.

My flight from London Luton to Sofia was very lively. I sat next to a Bulgarian lady, Margaretha, who was a nurse with one son. She had lived many decades in the Middle East and London. She was nice but talked non-stop! I even saw some photos of her son and his three children. She gave me a few tips about Bulgaria, but mostly told me about her life. We shared a taxi to the city centre because she insisted. I think that was partly because she didn’t have enough money, but I didn’t mind. She got out first and gave me 8 lev and I had to pay 28 lev total. The driver immediately switched from Bulgarian to English. He said, wow that old lady talks a lot and asked if she had been like that on the whole flight. I nodded with a smile.

One memory I have of Sofia is the number of churches, a mix of Orthodox cathedrals, a mosque and a synagogue. There is a lot of interesting architecture. In addition, I loved the traditional food and wine experience!

This is a short guide on travel to Bulgaria, specifically Sofia and the surrounding area.

The currency in Bulgaria is the lev. As of January 2022, one British pound was worth 2.34 lev.

I enjoyed a wonderful and friendly first meal at Ashurbanipal local restaurant. They have no physical menu because it changes every day so the lady just told me the options in English. I had salad, cinnamon beef, and green beans and apricots in spicy tomato sauce. All delicious! I also tried Chateau Karnabet Bulgarian red wine from a box (not bad!)

My second traditional meal was at Itzbata tavern, which had a lovely atmosphere. I had shopska salad which is kind of like Greek salad but the goat cheese was shredded. I tried more Bulgarian red wine and then had a pork and vegetable stew with eggs. It was all very tasty and hearty!

I used the Sofia Restaurant Week app to book lunch at Club Pouchkine, a fancy restaurant inside an old government building. The 3-course set menu for 29 levs (15 euros) seemed good value. I ordered the Russian salad with smoked salmon and red caviar, escalope of foie gras and lemon tart, plus a glass of Bulgarian red wine. The Bulgarian Merlot was deep and strong. The food was beautifully presented and delicious. Sadly I think this restaurant has closed down.

Pri Orlite is an18th floor panoramic restaurant and I was the only person there on a Friday afternoon. It seemed like it had once been popular, but may have gone out of fashion. The view was amazing! I had nougat ice cream with figs, which was so-so but also not expensive. I recommend going even just for the view of the city.

In addition to the meals, I also tried the local breads and snacks. There are plenty of bakeries around the city! I also loved the small kiosks that are located partially below ground. The service window is literally at sidewalk level! For example on bul. “Patriarh Evtimiy”

A: No, not for the capital if you just want to wander around. However, I do recommend the free Sofia walking tour. There are some friendly and enthusiastic local guides and you can tip them at the end of the tour.

A: I found about half of the people I met spoke English in Sofia, and even those who did not usually tried to help, such as a the bus driver.

A: Yes it seems to be a relatively safe city. When I travel alone I do not go out walking a lot late at night. However, during the day it seemed very safe to walk around.

Q: How easy is it to send postcards? The people in the post office were not very friendly nor helpful but at least I got some stamps for postcards.