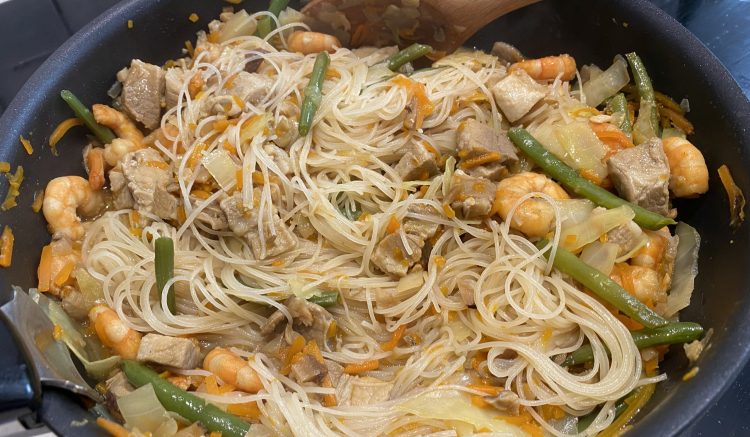 When I asked my friend Dexter if he had any recommendations for Filipino food recipes, he humorously reminded me that he doesn’t cook. However, a couple of weeks later I received a wonderful surprise in the post. He had sent me the Filipino cookbook, Kulinarya, by Neal Oshima. The recipes and photos were inspiring and I could not wait to try some of the recipes. In the end, I decided to cook four different things for a Filipino-themed lunch party with friends.

I chose the recipe for Pancit Bihon Guisado because it was a dish I had eaten many times as a child. Luckily for us, one of my father’s colleagues was Filipina and she used to invite us over for delicious home-cooked meals. I followed the recipe as closely as possible. However, I used shrimp (or prawns) without the shell, skipped the bilimbi, and used limes instead of calamansi. The sauce takes awhile to prepare but once that is ready, the noodles cook quickly. Somehow the dish manages to be filling yet not too heavy, with the thin rice noodles.

Later, I will share the other recipes but the full lunch menu of the day was Ukoy (sweet potato prawn fritters), pancit, chicken adobo, rice and canonigos for dessert. The pancit still tasted good heated up the next day!

First, in a small pot bring the water to a boil with 1/2 tsp salt, 1/4 tsp whole black peppercorns, and the pork belly. Reduce to a simmer then cook until the pork is fork-tender. Remove the cooked pork from the broth and place on a cutting board. Cut the fat from the meat, then slice the fat and meat into strips, separately. Reserve the pork broth.

Second is the preparation of the shrimp stock. Remove the shells and heads from shrimp and boil in a cup of water. Set the shrimp aside. Then drain out the solids from the water, and reserve the stock.

In a large wok, heat the pork fat slices over medium-high heat. Keep the oil and remove the solid pieces of fat. Then saute the garlic, onion, shrimp, and sliced pork. Add the shrimp stock. Next add the salt, pepper, soy and fish sauces. Add the carrots and green beans, and stir fry for a couple minutes. Then add the cabbage and mushrooms and stir fry for another minute. Lastly, add the pork broth and bring the mixture to a boil.

Finally add the dried rice noodles and mix well in the wok. Then cook until the liquid has been absorbed into the noodles, and the noodles become soft. Serve hot and garnish with kamias and calamansi. Also serve with extra fish sauce to taste.