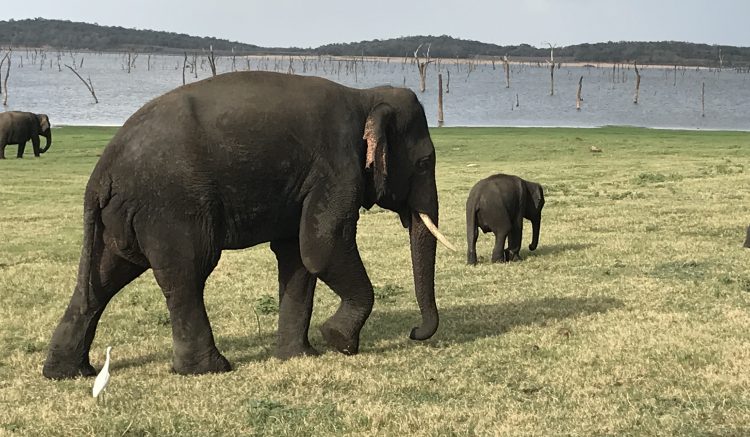 Our travel to central Sri Lanka took the majority of our 11-day tour. However, several regions make up what I have classified here as the central area of Sri Lanka. These include North Central, Central, Sabaragamuwa, and Uva provinces. We started our visit in the north observing local life and eating a home-cooked meal in Dambulla farming village. Then we hiked up Sigiriya rock and explored the ruins of the ancient kingdom of Polonnaruwa.

We had a brief visit to the Sabaragamuwa province when we went river rafting in Kithulgala. The area is famous as the site of the film Bridge over the River Kwai. In fact, we rafted down the Kelani Ganga river near the bridge.

Next, we headed south to Kandy, a cultural centre of Sri Lanka. There we watched a traditional dance show including fire walking. We also visited the temple with the sacred relic of Buddha’s tooth. As we travelled into the central province, the landscape changed and became more mountainous and green. The hills were often covered with tea plantations and Nuwara Eliya had a very British feel.

Finally, we enjoyed a scenic train journey to the beautiful and quaint town of Ella. It is well-known as a starting point for nature hikes and for its 9-arch bridge built by the British. We enjoyed the local hiking to Little Adam’s Peak. And we did an amazing cooking course at Kitchen Garden Ella. I often make my favourite Sri Lankan Recipes at home, as they are delicious and not too complicated.

Our first delicious meal in Central Sri Lanka was at a farming village in Dambulla. It was cooked by a local family and we tasted many vegetarian dishes.

Dinner was included with our stay at Wewa Addara Hotel. We had beef salad, mushroom soup with a nice ginger flavour, spicy chicken with fried rice and a poppadum, and papaya for dessert. And on our second evening we had a poached egg salad, seafood chowder, spicy beef with noodles, a poppadum and crème caramel or fruits.

For lunch after the Polonnaruwa visit, we ate at the Hotel Ariya. We enjoyed the buffet with rice, noodles, poppadum and many choices of vegetarian curry.

Near Matale, we stopped at Sangraha restaurant for the vegetarian buffet. It was good and we had rice, lentils, aubergine, green beans, breadfruit and poppadum.

In Kandy we ate at a fancy food court called Worldspice KCC (Kandy City centre). We had stir-fried oak Choi from the Chinese area, pad Thai shrimp from the Thai area, a vegetable pizza from the Italian area, and Coke Zero from the drinks area.

The Adventure Base Camp had simple tasty food such as fried rice and a chicken drumstick or vegetarian noodles and fries.

The Damro tea factory and plantation had a wonderful buffet lunch with lots of variety.

In Nuwara Eliya, we ate at the Araliya green city food court for dinner. We had a mix of Indian and Arabic food including naan stuffed with paneer, mutabal, shish taouk (chicken), and camomile tea.

Our first meal in Ella was at Chill Cafe. I ordered a mix of vegetarian curries and rice, and it was very tasty. Kem had fresh fish fingers and fries.

We had a break from curries at MozzarElla pizzeria in Ella. They have a Wood-fired oven and also make crepes. We ordered a large pizza with pepperoni, onions and capsicum/peppers. And we ordered the “yellow bubbly drink” which was Lion beer.

One of the culinary highlights was learning how to cook Sri Lankan food with Swarna at Kitchen Garden Ella. We made 7 curries, coconut sambal, coconut roti and poppadums. A feast!

A: Yes it is helpful, or at least a driver so you can get between the different places.

A: Yes most people spoke English

A: Sigiriya and Polonnaruwa are tourist sites so you can walk around them, but need to be driven between them. Kandy was quite large and crowded so we felt more comfortable driving around. On the other hand, Nuwara Eliya and Ella were walkable cute towns.