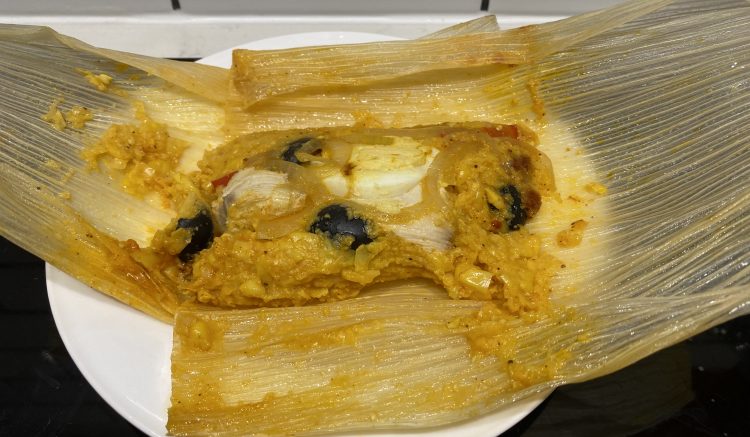 This is a recipe for humitas from Chile. My friend Amanda has been to Chile a number of times and when I asked her what her favourite traditional foods were, humitas were in the top three! Although they may look like tamales, humitas are made with mashed sweetcorn rather than corn flour or masa harina. They were easy to make once I found the achiote and corn husks at Mestizo Mexican food shop in London.

I have been to Patagonia and Punta Arenas, Chile in December 2017 on the way to Antarctica. Of the local foods I tried, I loved the lomitos (steak) sandwich, seafood and alfajores (caramel biscuits). In addition, the Austral Cerveceria had a great tour and beer tasting. Unfortunately, I didn’t get a chance to try humitas there, but the recipe for humitas is simple and tasty at home.

First, in a mixing bowl, blend the sweetcorn into a rough mash. Then mix in the remaining corn filling ingredients. Set aside to thicken for at least 30 minutes.

In a small frying pan over medium-low heat, cook the aji, olives, onion, achiote, oil and salt. Fry, stirring constantly, for a few minutes. Then remove from heat and allow to cool.

Take 2 Corn husks and lay them so that half of one lies on the half of the other. Place 2 generous tablespoons of the Corn mixture in the centre of the husks. Make a dent in the centre of the corn mixture and add one piece of chicken and one slice of egg. Then from the fried mixture, add a slice of aji, 4 olive halves and a few onion slices. Put a further 2 Tablespoons of the corn mixtuer on the top. Then press the whole mixture into a rectangular shape. Fold one corn husk over the mixture and the other corn husk over the first one. Tie the ends with nylon thread of raffia, about 5 cm from each end. Also wrap the humita lengthwise with the thread.

When all of the humitas have been made, place them in a wide pan for that they lie in one layer in the pan. Add just enough hot water to cover the humitas then cover and boil for 20 minutes. Unfold the humitas and serve warm.