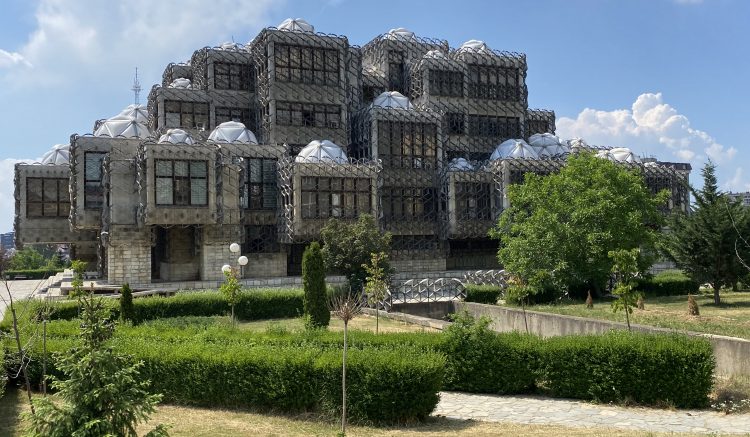 While I was staying in Skopje, North Macedonia for a few days, I decided to travel to Kosovo for a day. I know a few people who come from Kosovo, but not anyone who has visited as a tourist. Also, Kosovo was the final country of Europe that I had never visited! It takes about 1.5 hours from Skopje to Pristina by car, and I hired a driver for the journey. The bus takes longer, about 2 to 2.5 hours and it’s not very easy to find up to date information online. However, it is a lot cheaper for those on a tight budget.

Pristina, the capital of Kosovo, appears as a newer city, though there is a lot of history buried below and nearby. For example, the Museum of Kosovo has some ancient artefacts from the surrounding area including Ulpiana. The architecture is a mix of modern and classic buildings including churches and mosques. For me, the most unique building is the National library, which has described as brutalist with influences from the past. It also has many domes which allow light inside, and it was easy to go inside to look around. In general, there was a lot to see while walking through the city and I enjoyed exploring. The car was useful to see some sights outside of the city, Monastery Gračanica and Gazimestan monument.

One day seemed to be enough time to explore Pristina. However, if I can go back then I would visit some of the archaeological sites around the country.

The Euro is the official currency in Kosovo, although the Serbian Dinar is sometimes accepted in Serb-majority areas. As of June 2022, one British pound is equal to 1.17 euros

I was in Kosovo just for a day trip, and I enjoyed lunch at Liburnia, a quaint traditional restaurant. It is located on a quiet street and the entrance is through a flower-covered arch. The setting is lovely, with flowers, a terrace, and a wood-burning stove. Most of the foods are cooked in the big stove, and there were two men taking turns with the cooking. It must have been very hot since it was already a hot day!

I enjoyed the cherry juice, peppers cooked in cream sauce, and Kosovo meatballs with mushrooms in cheese sauce. As you can see from the photos, the portions were very generous. The service was friendly and efficient, and everyone spoke English.

Also, I had a few tasty snacks including a chocolate chip cookie from Furra “Lumi” and baklava and a cheese bread from Mama Mantia. Both places were very busy with locals. Furra means bakery in Albanian. At Furra “Lumi”, there were savoury selections and a lot of cakes and desserts that looked amazing. I chose the cookie because it was easy to take away, but the cream cakes were very tempting.

At Mama Mantia, most people were getting their lunch, 10 or more pieces of the mantia. These were small pastry filled with spinach, cheese, chili and/or herbs. They had a few desserts such as baklava, but seemed to specialise in the savoury foods.

A: No, not to see Pristina City. However, to get to some of the surrounding places, it would be useful to have a driver or guide.

A: Yes, most people spoke English including at museums, restaurants and the post office.

A: Yes, it felt safe to travel solo

A: It was not easy to find postcards, as there were not really any tourist shops in Pristina. Luckily, a man at the National Gallery of Kosovo told me about a little shop with nice postcards. I found it and met the artist there. See instagram @il_ilirelepaja and for the actual location, search for Rruga Andrea Gropa. Stamps were easy to get from the post office and there are many in the centre. See Sending Postcards from Abroad for details on cost and the time it took to reach the USA.