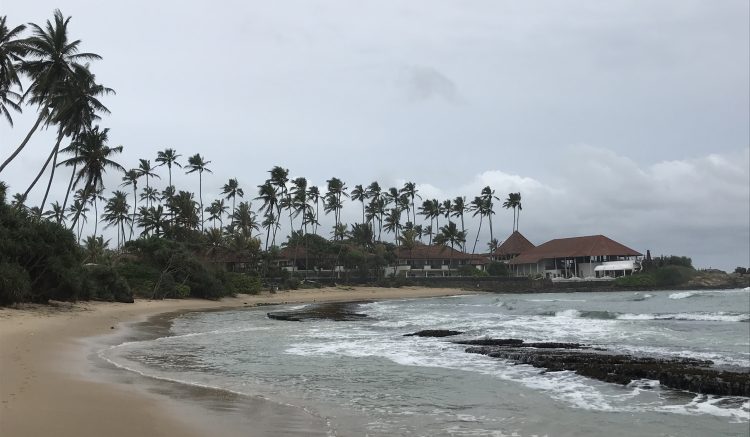 On the last leg of our trip, we were able to travel to southern Sri Lanka along the coast. Along the way we stayed at two lovely seaside hotels which felt like luxury for the end of our trip.

First, we visited the Yala National Park where we saw many types of wildlife and a beautiful sunset. It was also fun watching the locals hop out of the jeeps and walk around with the monkeys. In fact, one monkey stole some snacks from a family!

Next, we walked through giant puddles and mud to reach the Hummanaya blow hole. As the name suggests, this was a natural attraction where the waves hit the rocks causing a spray of water. There were many local tourists watching the blow hole, and along the way there were many people selling fresh fried fish. Along the coast, we also stopped at a turtle hatchery. We were able to hold a baby turtle and saw tanks of injured and deformed turtles who had been rescued.

Finally, we explored Galle fort and town with its prominent lighthouse. Fortunately it is also the location of a wonderful restaurant called the Tuna and the Crab, part of the Ministry of Crab family. Delicious food in a cool and stylish setting.

This is a short guide based on our travel to Southern Sri Lanka along the coast, and then back up to Colombo.

Our first lunch was at the Grand Yala Hotel. I had a cheese omelette and chips and Kem had spring rolls and chips. My omelette wasn’t cooked in the middle so I just ate the edges. Dinner was better and I enjoyed my tuna steak and chips with fresh fruit for dessert.

We had lunch at the Dickwella resort. I had a spicy bbq chicken pizza which was so-so. Kem had Kung fu chicken (like Kung pao chicken but with cashews instead of peanuts). The buffet dinner was good. We had a choice of noodles, potatoes, carrot and orange soup, fried fish, grilled prawns and fish, and steamed vegetables. They had some desserts too so I had papaya, curd mousse and chocolate mousse cake.

In Galle, we treated ourselves to a special meal at The Tuna and the Crab, which is related to the Ministry of Crab in Colombo. We had sashimi salmon and panko onion rings, then Kem had crab pasta and I had crab fried rice. Delicious flavours!

The buffet at Eden Resort and Spa had a huge selection of food! I had some curries, rice and poppadum, and a side of spaghetti. Then I had a few different desserts including bread pudding, chocolate jelly, and sago pudding. All washed down with Lion stout beer and an arrack traditional liqueur shot.

A: Yes it will make it easier to travel between places. And also a jeep or truck is needed for the National Park.

A: Yes most people spoke some English

A: Galle was very walkable to explore the fort and city. Our other stops were to see specific places of interest, so we drove between places and just walked around to see the sights.