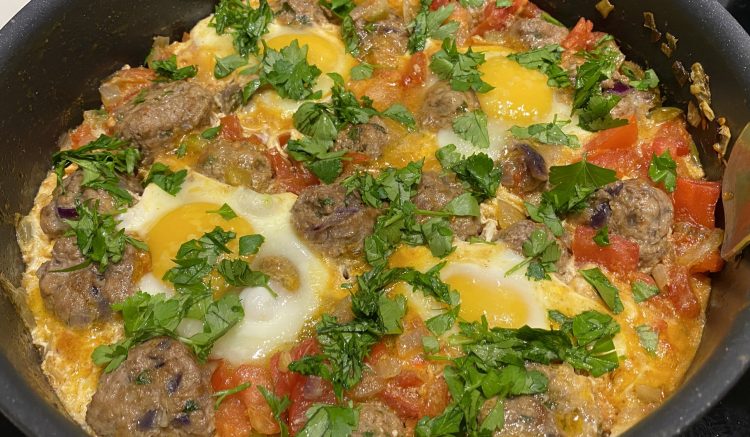 This recipe for Chekchouka was recommended to me by my Moroccan friend Ikram. As with the other recipes she’s recommended, it was delicious and flavourful! In addition, it’s also very colourful. You can choose whether or not to add the kefte, as it is also tasty as a vegetarian dish with just the eggs. The recipe is simple but does take some time for the multiple steps.

Originally, the recipe for chekchouka came from Cooking with Alia. Then I adapted it slightly to add the kefte. Also, I used fresh tomatoes instead of tomato sauce.

One tip for the cooking process is don’t cover the pan when cooking the eggs. You want the heat to come from the bottom and cook the whites, but leave the yolks a bit runny. Additionally, make just enough for that meal, as re-heated eggs are not as nice. If you have made extra sauce, then I would recommend saving the sauce but cooking the eggs while re-heating the sauce. Finally, use ripe vegetables and herbs for the best flavour. I like to eat this served with bread as a full meal.

First, for the kefta, in a large mixing bowl combine the minced lamb, onion, spices and herbs. Season with salt and pepper. Then mix well and shape into one-inch diameter balls. Heat the olive oil in a frying pan over medium heat and cook the kefta for about 5 minutes, browning on all sides. Transfer the kefta to a plate.

In the same pan, heat the additional 2 Tbsp olive oil over medium heat. Then add the onions and garlic and cook for 5 minutes or until the onions are translucent. Next add the peppers. Add the chopped tomatoes, then cook for 5 minutes. Season with salt and pepper and cook while stirring for 2 minutes. Add water if needed to make the sauce more liquid.

Add the kefta to the sauce and cook for about 30 minutes while the sauce is reducing and thickening.

Using a spoon, create four small wells in the sauce, crack an egg in each well. Cook for about 5 minutes until the egg whites are cooked through. The yolks should still be soft.