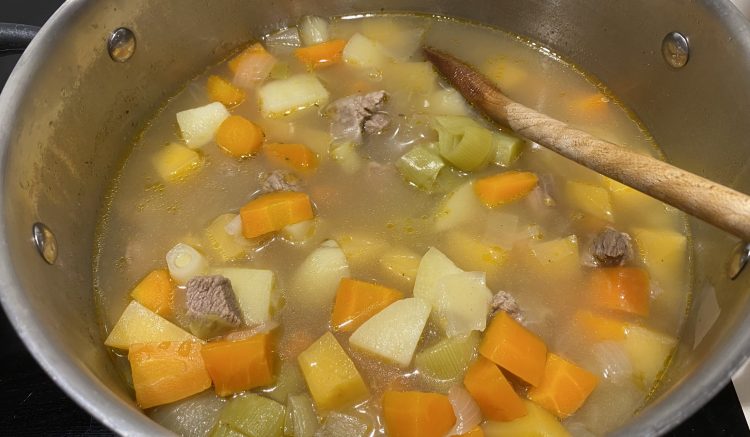 My friend James Davies and his fellow Welsh friend Sion suggested this recipe for Welsh cawl. At first, when I asked about a recommendation for a typically Welsh recipe, they were unsure of what to suggest. In the end, they agreed that a recipe for cawl would be both typical and tasty. I have adapted the recipe for cawl that I found on the BBC food website. I must admit that one of the adaptations I made was to use lamb from New Zealand. Unfortunately, I did not find Welsh lamb at the supermarket!

Should this be considered a soup or a stew? If it is a soup, it is a very chunky one. However, if it is a stew, it is slightly runny as the sauce is not thickened. The BBC food recipe calls it a stew, just for the record. I served the cawl with bread as a filling and warming meal, perfect for winter.

First, put the lamb into a large pan and pour over the stock. Next, bring to the boil, then reduce the heat and simmer for 15 minutes.

Next, add the vegetables and cook for an hour. Remove from the heat, cover and set aside to cool. Then put in the fridge overnight. (In fact, due to time, I skipped this step and served it hot from the pot)

When you are ready to serve, return the stew to a boil and cook for 15 minutes, or until completely heated through.

Finally, spoon the cawl into serving bowls and serve with crusty bread and Welsh cheese.