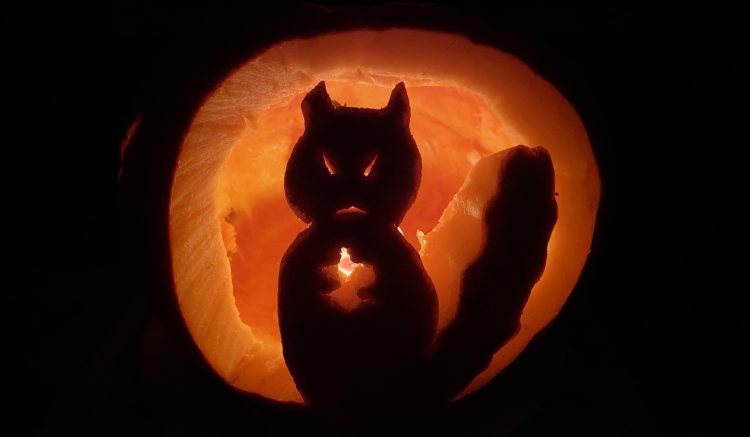 Wikipedia explains the history of Halloween very well, so I won’t go into too many details. Instead, I plan to share my Halloween traditions from growing up in California, USA. Additionally, I can compare with the Halloweens in France and the United Kingdom that I saw as an adult. Overall, I enjoy celebrating Halloween as a fun holiday. However, at least in the USA, it seems to have lost the original purpose of remembering the dead. Instead it is a holiday to dress up, eat candy, have fun and maybe play some tricks.

On the other hand, there are also some sinister things that happen on that night. For example, the US police often warn black cat owners to keep their cats indoors on Halloween to protect them from attacks. And I recall as a child that there was an epidemic of people putting needles and razor blades into the candy. We could get our candy x-rayed for free at the local hospitals… Well, there are always some who spoil the fun. But for now, I will focus on good aspects of the holiday and the interesting ways I have seen it celebrated in different countries.

Halloween in the US

The 31st October, is a holiday but not a day off in the US, at least in most places. However, students wear costumes to school for Halloween activities on the day. Sometimes there is a costume contest or a party with sweets. Often, it is fun throughout the day and into the evening.

When I was a child, the main attraction of Halloween was the huge amounts of candy I could collect in one night. I just put on a costume and went with my parents around the neighbourhood saying “trick or treat”. We learned to use strategy, such as finding out which houses were giving out the full size candy bars rather than the fun size ones. And we also learned negotiating skills, trading other kids for our favourites. I loved Smarties (the American chalky sour kind), Snickers, Nerds, Milk Duds and Twix. On the other hand, I was keen to trade away Milky Way and Three Musketeers.

Of course, dressing up in itself was fun. As kids, we often got to ask our parents for a costume of our choice, bought off the shelves. As we grew older, we became creative and made our own costumes. I remember in junior high when I was a basketball hoop and convinced a friend to be a basketball. Thank goodness there were no digital cameras back then!

Another fun activity was using our artistic skills to carve faces or other designs into pumpkins. We would sometimes carve more than one design on the same pumpkin to maximise the use. As an added bonus, we roasted and salted the pumpkin seeds as a tasty snack.

Some of the typical games we would play were bobbing for apples, pin the tail on the donkey, and a sensory game I will try to describe. At the Halloween carnivals, we would put our hands into boxes filled with mystery items and then guess what each was supposed to be. For example, cold spaghetti noodles were worms. Olives were eyeballs. Canned corn kernels or candy corn were teeth. You get the idea, right? Gross and amusing at the same time!

The more sophisticated Halloween carnivals or parties had haunted houses. And the theme was taken to the maximum at places like Knott’s Scary Farm. During the day Knott’s Berry Farm amusement park is similar to Disneyland but during the night time hours in October, it is a very scary experience! To this day, Halloween is still popular among many Americans of all ages.

Halloween in the UK

Traditionally in the UK, religious people would have celebrated All Saints Day and All Souls Day. In fact, some people still do celebrate these holidays to honour the Saints and all departed souls, respectively. However in university student culture, I observed that Halloween grew more and more popular in the early 2000’s.

When I first moved to the UK in 2001, Halloween was mainly a holiday for small children to dress up and trick-or-treat. Dressing up was not out of the ordinary but for Halloween costumes were meant to be scary. Think ghosts, witches and monsters. Whereas in the US you could dress up as anything. What the UK calls fancy dress is the same as wearing costumes or dressing up in the US. This is popular for all ages throughout the year in the UK and not just for Halloween. However, after a few years, it became more popular. I found that people at my University became more interested in joining for Halloween parties. We even had lots of volunteers to bob for apples in freezing cold tubs of water!

Nowadays, it is easy to find all of the Halloween paraphernalia you would expect in the US. This includes plastic jack-o-lanterns, plenty of choice for costumes, pumpkins for carving and other decorations. Trick-or-treating also became popular and I noticed that a carved pumpkin out front usually indicated the house would have candy. However, during the pandemic in 2020, the government banned door to door visits. Therefore, during that time I saw people putting buckets of candy outside with a note to take a piece.

In contrast to the USA, France celebrates a day off on the 1st November as La Toussaint, literally translated as All Saints’. The idea of the holiday is to remember the dead. However, when I asked my French friends what they would do on that day, most just considered it as a day off. And the French do not traditionally celebrate Halloween or All Hallow’s Eve, although now most have heard about the American tradition.

By the time I moved to Paris in 2015, I feel like the Halloween popularity was on the decline. French friends told me that it was a big deal until a few years back, and then fewer bars and clubs used the theme. In fact, the only time I can remember being at a bar heavily decorated for Halloween was on a road trip to Rouen (not in Paris!)

I always found pumpkins for carving, since pumpkins are considered food and they are generally available throughout the year . There were also some decorations available like spider’s webs, fake spiders, and pumpkin-themed items. In contrast, there costume availability was limited for children and almost nothing at local shops for adults. There was also a general idea that Halloween costumes needed to be scary. Online stores were available to order costumes for delivery, but I didn’t have an occasion to dress up while living in France. In fact, the only Halloween party I went to during those three years was one at work, which the administrators kindly organised for all of us. In general the they also bought a lot of orange items such as mandarins and Cheetos! We had candy and decorations and it brought back some Halloween nostalgia!

Where have you celebrated Halloween and what are some of the local traditions in different countries?