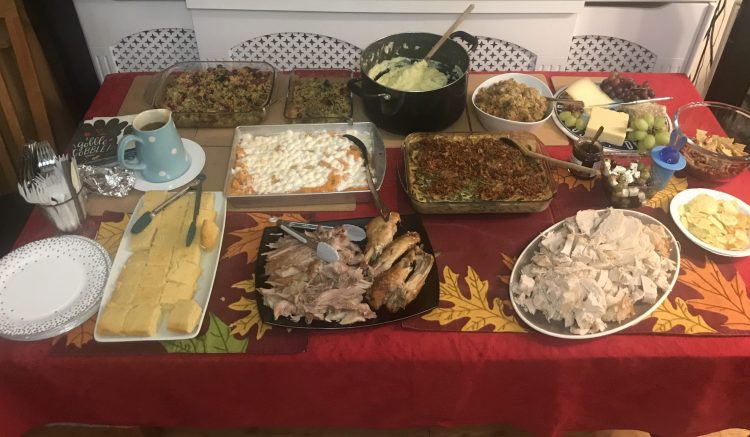 Can you believe it is that time of year already? In the USA, Thanksgiving falls on the third Thursday of November. As a child, I remember reading in the news that this is the biggest holiday in the US because it is non-religious. For me, it is definitely my favourite holiday because of the food, family and friends! And my Thanksgiving traditions have persisted wherever I am in the world.

In recent years, some people have criticised the history of Thanksgiving due to the mistreatment of native Americans at the time. In fact, some refuse to celebrate the holiday. That is each person’s choice. However, for our family, the Thanksgiving traditions are about expressing gratitude, bringing family and friends together, and enjoying Autumnal foods.

I would like to share some of my Thanksgiving traditions that I have developed with family and friends over the years. Thanksgiving is a holiday to bring people together to enjoy the traditional autumn-themed food. And you can celebrate it anywhere in the world. I have hosted Thanksgiving in the UK and France with some improvised ingredients. The most important component is the togetherness spirit of the occasion!

When I lived in the US, Thanksgiving meant cooking and eating all day on. As is common in the US, the style would be a pot-luck, which means each family was responsible for bringing one or more dishes to the host’s home. I still remember the delicious smoked Turkey that my uncle would prepare, along with cheeses and whatever else could be smoked. Mashed potatoes, sweet potatoes topped with marshmallows, vegetables, casseroles, salads, and many desserts round out the heavy meal. One of the main desserts was always layered rainbow Jello. In addition to the main meal, we always had plenty of snacks around since the event lasted for most of the day.

In addition to eating, we would watch football games all day, even if we did not care who won. Oh and I shouldn’t forget the famous Macy’s Day Thanksgiving Day Parade, broadcast from New York City. That was definitely a tradition too.

Then, after the big meal, we would prepare to shop on Black Friday. At times, we even woke up at 3 or 4 in the morning to hit the sales. Those were the old days and now you can do the Black Friday shopping before, during and after Thanksgiving- ONLINE! I still remember one Black Friday when my sister and I went with my cousins to the mall in the dark, in the middle of the night. When we finally found what we wanted one of us had to fiercely guard the shopping cart as people tried to steal from it. Absolute madness!

Once I got to college, I started hosting a pre-Thanksgiving party before we all went home for the holiday with our families. In fact, this type of party is now termed Friendsgiving, but there wasn’t a name for it at the time. The parties got so large that my roommates and I started hosting two days in a row with 50-60 friends each day. I also had to ask nearby friends to roast extra turkeys as we usually needed two or three per day!

Besides enjoying the food, the parties were a lot about bringing people together. Friends met each other, often for the first time, and they formed new, lasting friendships. To this day, my friends still remember these parties fondly and some recall how they met other long-term friends there!

When I moved to the UK in 2001, I felt a little homesick in the first few months. It didn’t help that the weather in England from October until March is quite dark and gloomy. At least I had Thanksgiving to look forward to, though I was unsure how this would be celebrated by the British. It turned out that most non-American I knew had heard about Thanksgiving, but knew little about it. So, I decided to plan a Thanksgiving dinner at my college.

Luckily Christ’s College, Cambridge was very supportive of activities involving the graduate students in the MCR (Middle Common Room). We received some funding and permission to use the room to host a Thanksgiving dinner. As the number of guests was more than 50, I had to ask some other students to roast the extra turkeys. At the time, I did not realise that some British gas ovens heat with fire from the sides. The pans were a little too small on we had some minor fires from the turkey fat…. I had some exasperated porters calling me to ask why there were several fire alarms going off in the college accommodation. Oops! Luckily we were forgiven and the dinners became an annual tradition.

One of my fondest memories of these college Thanksgivings was the international aspect. The University of Cambridge has a very international student population, and the Christ’s MCR was no exception. For the pot-luck some people made traditional American dishes and others made dishes from their home countries, since those recipes were more familiar. We had Indian curries, Chinese spareribs, and other delicious contributions. Even some of the American recipes had some interesting variations which I have incorporated over the years. One was adding chocolate chunk in the pecan pie. Now I almost wonder whether I should ever not add chocolate. And someone else’s cornbread stuffing replaced the pre-made boxes as a new favourite. These contributions from the other students all added to the uniqueness and variety of the Thanksgiving celebrations.

The Christ’s College MCR Thanksgiving pot-luck dinners continued for at least a few years after I graduated. I wonder sometimes if the new students knew why they were celebrating the American holiday each year. I hope that the tradition continues!

At Home in the UK

After the good old University days, I continued to host Thanksgiving at my various homes in Cambridge and London. Somewhere along the way, we acquired turkey hats, which have now become part of the tradition. The guests pass the hats around all night for silly photos. Although the hats are not quite flattering, they are funny and definitely make the kids laugh at our silliness.

I love Thanksgiving so much that I convinced work colleagues to break some rules about eating in meeting rooms, and we hosted Thanksgiving for several years in a row at a former company. It was a great opportunity to socialise with colleagues and enjoy some interesting home-cooking. I use the word interesting, as we sometimes had some unusual dishes but at least we could see the effort!

A last tradition UK Thanksgiving tradition originated at a work party. One American colleague said she had to leave, but first wanted to share one of her own traditions. Then she went on to say that at her family dinner, each person would share at least one thing they were grateful for then pass to the next person. She then said “I am grateful to Lianna for organising this Thanksgiving party!” and then she passed the sharing to someone else as she left the room. There was temporary awkward silence as shy colleagues looked down at their feet. But then people got into the spirit, and we had a nice round of gratefulness sharing.

France was the most challenging place to find ingredients for Thanksgiving. First was the saga of finding a turkey. Turkeys were nowhere to be found in supermarkets in November. I had expected it to be the same as in the UK where there are always some turkeys available throughout the year. In the end, for the first year I was there, I had to order a fresh turkey from the butcher. I asked for one as close to 10kg as possible and was told I could pick it up the morning of my party. When I arrived at the butcher, the turkey was just under 6kg, and it cost over 70 euros. Steep cost but at least I knew it was fresh and had never been frozen. In fact, it still had legs with dirt on them!

The following year I was not going to pay an extortionate price for a small turkey, so I had another idea. Fortunately I was flying to the UK a couple of weeks before Thanksgiving to see a concert. On the way home, I asked my friend to stop at a supermarket before he dropped me at the Bristol airport. I then wrapped a frozen turkey in a cooler bag, and packed it in my checked in luggage. Amazingly, it made it across and was not stopped by customs as at the time the UK was still in the EU. It was also still solidly frozen so I could store it in Paris until I needed it. I don’t recommend this as a method for getting a turkey to France!

The next unexpected challenge was finding fresh sage for the stuffing. I checked a number of supermarkets with no luck. My American friend suggested trying the local fruit and vegetable shop. They said they could special order sage, so we ordered a few packages to pick up in a few days. Luckily they charged us the normal price for fresh herbs and we had enough to use and freeze for later.

Cornmeal was only available from the Indian supermarket. Potatoes, sweet potatoes, green beans, and cranberry sauce were quite easy to find. Unfortunately fresh cranberries were also nowhere to be found so I had to substitute with dried.

Finally, the day arrived and I welcomed friends over for a traditional Thanksgiving in my Parisian flat. For many, it was their first Thanksgiving experience. The most unusual taste for my French friends was the sweet potatoes with marshmallows. The word they use when something is a bit weird or suspicious is “special” – just say that with a French accent like speh-see-al. Definitely made me laugh to see them try it!

In addition to the American food, we had French starters and French wine for the festivities. I printed some paper turkey hats for the two kids at the party. And we ended the night with a Just Dance competition to burn off some calories.

Go to US Recipes with a special Thanksgiving section

Go to My Halloween Traditions