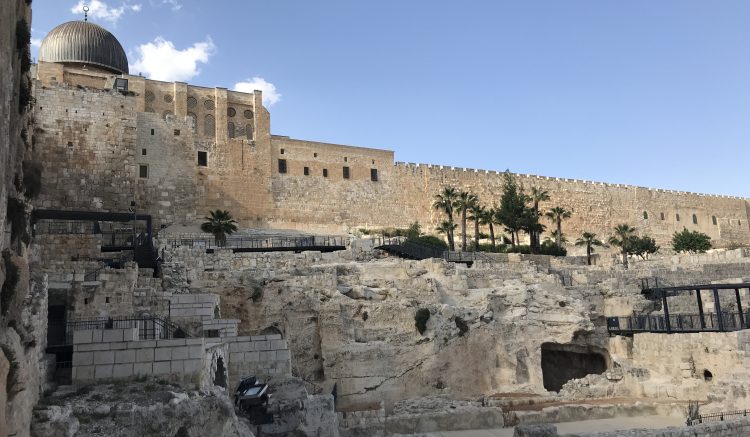 Travel to Jerusalem is difficult to summarise in one post! There is so much history to learn about and the modern culture is diverse and interesting. There are three main religions in Jerusalem – Judaism, Christianity, and Islam. And there are distinct areas and places of worship for each of these in the Old Town. The city is walkable and there are things to see throughout the Old Town and walking up the Mount of Olives. The food was delicious and fresh, and the smell of bread is in the air throughout the old town. Although I experienced being there during Passover when unleavened grains are restricted in many places, the unleavened bread was still plentiful.

As a visitor, I felt safe walking around during the day and did not walk a lot by myself at night. However, I was sometimes bothered by men asking me a lot of questions including where I was staying. In addition, I had some difficulties with accessing Temple Mount due to restrictions, but eventually I found the time and place I could enter. When we were on the Western Wall underground tour, our Jewish tour guide said it was not safe for Jewish people to walk in the Muslim area at night. In fact, since our tour was ending at sundown, instead of exiting outside, we retraced our steps to exit where we had entered near the Western Wall.

The city itself was incredible and I could have spent more time there exploring, but I only had four days. During that time, I also took 1.5 days for trips out of Jerusalem. It is closer to reach Masada, the Dead Sea and Bethlehem from Jerusalem than from Tel Aviv.

This post is a short guide to travel to Jerusalem, in addition to the guide already shared on visiting Israel.

The Mahane Yehuda Market, Jerusalem was lively, colourful and full of fresh ingredients and places to eat. I bought a lot of snacks here like dried fruits and nuts. And I also had some delicious freshly pressed pomegranate juice. It’s fun just to walk through the market to look around.

At Jachnun bar I had a delicious dinner of shakshuka and garlic bread with hummus. It was interesting because the eggs were fried rather than poached in this version.

In my Israel post, I talked about the bread and I will mention it again because the fresh bread is so delicious! There are also many varieties to try. I especially like the Jerusalem bagels. They are lighter than an American bagel and an oval rather than circular ring.

We had a simple, tasty meal in the Old town at Basti restaurant and cafe. It was a mix of grilled meat, bread and salads. They even had a happy hour for the food! Google reviews does not rate it highly but at the time not a lot of places were open due to Passover. And we enjoyed the meal!

A: No, not for walking around the Old City and to the sights around the Mount of Olives. A tour guide is required for the tour through the tunnels under the West Wall. Also for exploring places just outside of Jerusalem, I found it useful to have organised transport.

A: Yes for the most part, except for smaller shops.

A: Yes, it is walkable especially around the old city, which is compact and has many narrow, winding streets.