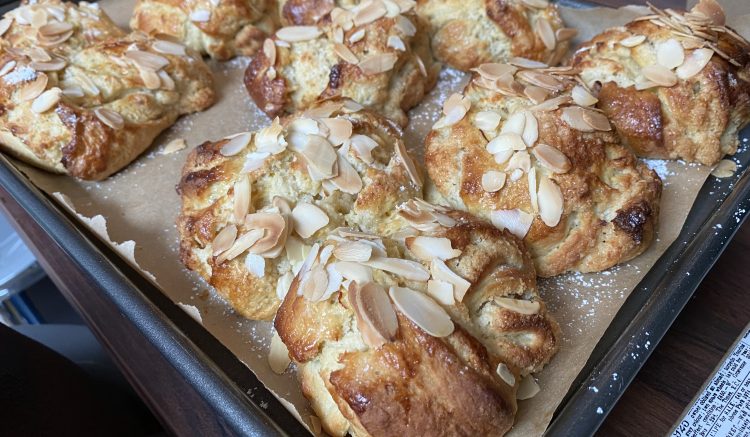 This recipe for Saffransbullar (Saffron buns) from Sweden was sent to me my friend Paul, who has lived in Sweden for years. He said that these are one of his favourite snack foods. Originally the recipe was in Swedish on the Roy Fares blog, and I have done my best to translate it.

I found the recipe easy but you do need to have some time, as the dough needs several hours to rise and rest. In addition, I made a modification to use ground almonds instead of almond paste. This was simply because I did not have any almond paste at home. However, I think that the end result was similar to the original version.

The scent of the buns baking in the kitchen filled the house with sweetness. And the final product looked beautiful so I could not wait until they were cool enough to eat. The buns were tasty although the dough was a little heavy, so very filling. I am not sure if that was just my dough or the general style of the bun. Also, I am used to the lighter French croissant pastry so this felt a lot heavier. When I make these next time, I will use thinner dough strips and make them smaller!

Start with a pre-dough. First, heat the milk with the saffron until finger-warm and dissolve the yeast in it. Next, mix the milk with the wheat flour, knead into a fine dough. If you have a kitchen assistant, I recommend you use it with a hook, then run the dough for 5 minutes. Leave with a cloth cover and rest the dough for 15-20 minutes.

Finally, let the dough rest under a cloth for about 20-30 minutes so the dough releases its tension.

For the almond paste, mix the ground almonds with granulated sugar and vanilla sugar. Mix in a little at a time of the butter until you have a smooth and fine filling.

Next, roll out the dough, about 45×70 cm and about 0.5 cm thick dough on a lightly floured table. Spread the filling evenly over the dough. Grasp the top of the dough and fold it over so that you get half a fold. Divide the dough into oblong strips and make small knots by twisting the strip around two fingers like a ball. Place the buns on a plate with parchment paper. Let the buns rise properly under a cloth for 1-2 hours.

Heat the oven to 200 degrees. Brush the buns with egg and sprinkle with planed (sliced) almonds and powdered sugar. Bake in the middle of the oven for 13-15 minutes until your saffron buns have a nice golden brown color. Serve warm or re-heat them if eating them over the next few days.