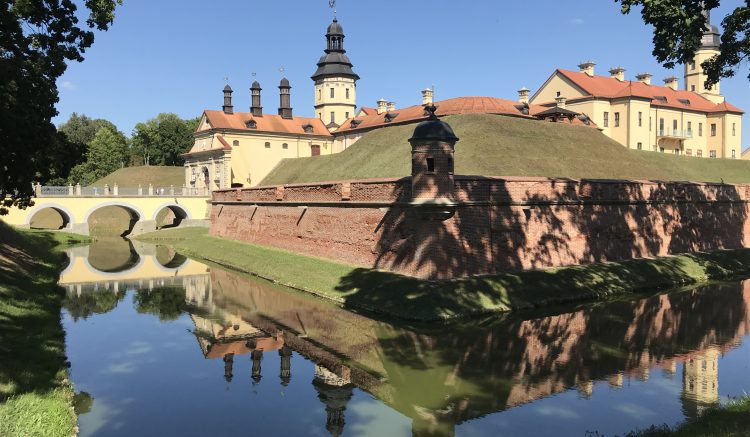 In August 2018, I had the idea to take a side trip to Minsk on the way home from Norway. Obviously, I did not take the most direct return route, but I am glad I visited. When I started to plan my travel to Belarus, I contacted my friend Sveta to ask for some recommendations in and around Minsk. She gave me a lot of information about the sights and the food. Thank you Sveta!

During the tour of Mir Castle and Nesvizh Palace, our guide Natalya told us a lot about Belarus history and legends. Every statue had a story. It was fascinating! We three English speakers on the tour were lucky that our group moved quickly and we saw and learned a lot.

As I write this in January 2022, I am feeling lucky to have been able to visit a few years ago. Belarus is not considered safe now with the building military presence of Russia near the borders. The US Department of State has recommended not to travel to Belarus. Hopefully, one day it will be possible again because it is a beautiful country with so much history. The people were warm and helpful, and the food was delicious.

The currency in Belarus is the Belarusian ruble. As of January 2022, one British pound is equal to 3.5 rubles

My first meal was at Grunvald cafe for dinner, recommended by Sveta. The setting is very traditional and relaxed. The beet soup was tasty with shredded beets, soured cream and eggs. The roasted potatoes were on the side and I could only eat half of them because it was too much. The draniki (pancakes) were delicious and hot, baked with the meat in a bowl. I tried Belarusian wine and it was okay but quite sweet. The waiter did try to warn me!

I had lunch at Korchma restaurant on Trinity hill with a beautiful view of the river. I ordered grandmother’s soup with beef and sauerkraut, then draniki with pork mince and white gravy (called kolduny instead of draniki when they are stuffed with meat). The menu was in English and the girl serving spoke some English too. The music in the background was a Paula Abdul album!

Try the kapiroski cocktail at Pinky Bandinsky bar. And outdoor cocktails at Tiki Bar, very chilled and good for people-watching.

Definitely visit the famous sweets shop Lakomka, and taste the zefir, chocolate covered marshmallows. There are many unusual candies.

My last big meal was at restaurant Kamyanitsa recommended by the first guide. It’s very cute and looks like a cave inside. I started with pickled herring served with crispy brown bread, soured cream, pickles and onions. The machanka pork stew was cooked with bacon in cream sauce and served with pancakes. Heavy but delicious!

A: No, not to visit the city of Minsk. However, to see some of the sights further out I would recommended a tour bus for the transport and some interesting information.

A: About half of people I met in Minsk spoke some English, sometimes limited. I recommend to have a translator app to hand.

A: Yes it felt very safe walking around Minsk during the day. In the evening I used Ubers, which were not expensive and felt safer for me. Other people were walking around, so the streets did not look empty

Q: How easy is it to send postcards? Eventually, I found the post office, but it was not quite where it was meant to be on GoogleMaps. Then it was easy to buy postcards and stamps.