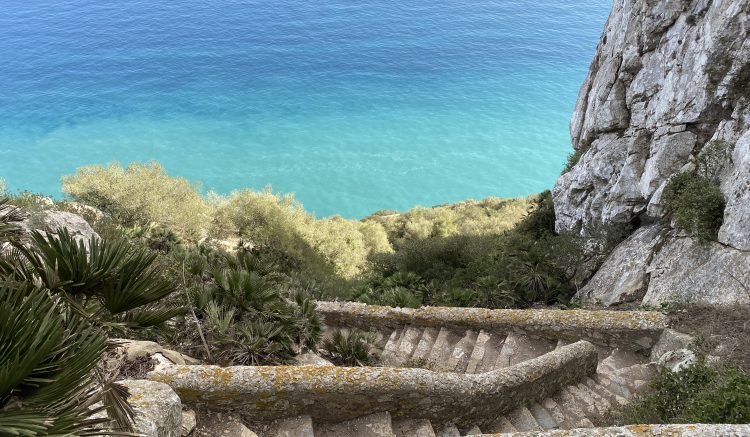 Since I was young, I remember hearing about the rock and strait of Gibraltar, and I’ve always been curious to visit. It has been a much-contested area and is a UK overseas territory right at the bottom of Spain. In November 2022, I was looking for a sunny place to visit and decided to travel to Gibraltar. In fact it is quite easy to travel to Gibraltar with a direct flight from LHR that takes just over two hours. However, the landing is not for those afraid of flying. The runway is short and between the water so the landing and braking are very hard!

Unsurprisingly, the Rock was the highlight of my visit. It takes up a lot of the land area of Gibraltar and has a lot to see. There are tunnels, bastions, batteries, monkeys, caves and even a castle. I cheated and took the cable car to the top and then worked my way down (and sometimes up again) to see the various sights. Another nice walk was down to Europa Point to see the lighthouse and the view across to Morocco. The weather was gloriously sunny throughout my visit and I even got sunburnt!

Some people may wonder if it is worth it to travel to Gibraltar for a visit, since it is quite a small area. My recommendation would be that it is worth a visit for the history! Although you can probably see most things there in 1.5 to 2 days, you can literally walk across to Spain. And then from there it is easy to see some other nearby places, and even to take a ferry to Morocco.

The official currency of Gibraltar is the Pound Sterling, the same as in the United Kingdom

Upon arrival at Gibraltar Airport, I had a few hours to wait for the next bus. So, I decided to walk to the north part of the city centre. I found a nice restaurant called Bianca’s by the Marina Bay. The server was super friendly and gave me some hiking tips for the Rock. I had a tasty bacon cheeseburger and fries, and a pink gin and tonic. The food was good and plentiful. It was the first time I had tried Puerto de Indias Spanish pink gin and I loved it!

One eve after a big day of hiking, I didn’t feel like going out for dinner. Instead I got an Indian takeaway from Neha Curry House. The menu was an interesting mix of Indian, Chinese and Moroccan flavours. I had the chili paneer, garlic naan and prawn dansak curry. The two mains were delicious and flavoured well, but the garlic naan was a bit strange. It was like a flat pizza base with garlic. Perhaps that was because they didn’t have a tandoori oven there? The people were friendly and I am definitely glad to have tried Indian food from Gibraltar.

Finally, my last meal was a relaxing lunch at Monique’s Bistro in Queensway Quay. The terrace in the sunshine was lovely before I headed back to rainy London. The menu had so much choice, but I felt like having seafood. For starter, I had a prawn Caesar salad. And for the main I had the house seafood chowder with bread, all washed down with rose wine. Perfect last meal in Gibraltar!

In the short time I was in Gibraltar, I tried four different bakeries. First, Gibraltar Confectionary was okay but the service was poor. They seemed very unhappy to have to make me a sandwich when I ordered it. Therefore, I can’t say I would recommend it though the food was okay. Apparently, they also make falafel and other food, but then I passed by at lunchtime on a Sunday, the place was empty.

Second, Pastel was a very small, friendly café with breads and strudel. By the time I was passing by in the late afternoon, they had sold out of some pastries. I had the cherry strudel and it was light and delicious. It also travelled well as I took it with me on the journey home!

Third, I had a cranberry white chocolate doughnut from chök – Main Street. It was as beautiful as it was delicious, and was decorated with flowers and chocolate balls. The bakery also sold handcrafted chocolate bars, cronuts and muffins.

Finally, I had two cupcakes from A Piece of Cake. The one in the photo is an Aero mint chocolate cupcake. And I also had the apple speculoos one. Both were delicious and fresh!

A: No, there are plenty of signs to show the sights around the city. And for the rock, a nature reserve pass is needed, and you get a map with that. However, if you don’t like walking a lot up and down hills, then you may want to hire a taxi tour.

A: Yes, everyone speaks English.

A: Yes it is safe and easy to get around

A: It is easy to find postcards at tourist shops and stamps at the Royal Mail Post office. The stamps from Gibraltar are different from the United Kingdom. See Sending Postcards from Abroad for details on cost and the time it took to reach the USA.