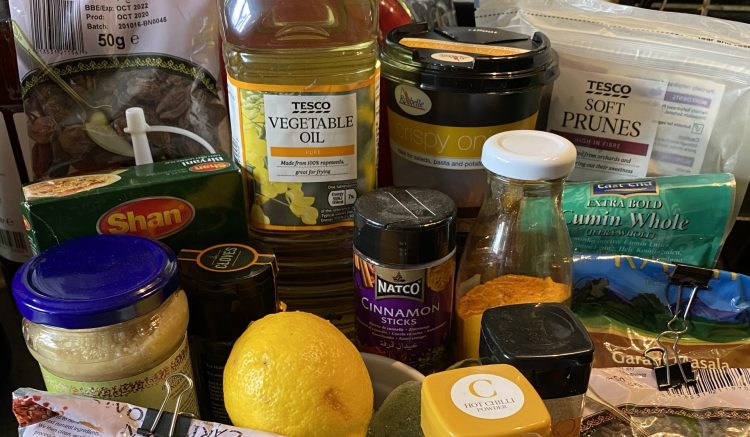 Most of us may think of cavemen or cavewomen when we hear the words hunting and foraging. However, what does it mean to do modern hunting and foraging? For me it means searching in supermarkets, specialty ethnic stores and even online for ingredients. Often there are some exotic ingredients necessary to make traditional recipes from other countries. On the other hand, it is surprising how many ingredients are common across recipes from different parts of the world! And lastly, it also means being creative when you cannot find exactly what you want. What is the closest substitute that will complement the flavours of the recipe?

The first example of my recent modern hunting and foraging for ingredients was for Mexican cochinita pibil. The main ingredients were easy to find at the supermarket. These included pork, oranges, vinegar, onions, garlic, and most of the spices. However, there were three more challenging ingredients to find. The first was axiote (or achiote), a red spice or paste used often in Latin American cooking. I ended up ordering it online from Amazon. The second ingredient was banana leaves, and I found this at a Thai store, because banana leaves are common in Thai cooking. And the last ingredient was the habanero chilies, which I found at Mestizo Market in London. In the end, I was able to find all necessary ingredients for the recipe!

A second example of modern hunting and foraging was for Korean Galbi Jjim. In the end, I did not find all of the traditional ingredients. However, I found some close substitutes, which resulted in a delicious dish at the end. First, I hunted for beef short ribs, which is uncommon in the supermarket. In the end, I found them at a specialty butcher, Hook and Cleaver. Next, I looked for Korean ingredients at Duri Mart Korean store. Luckily they had fresh Korean radishes and corn (instead of rice) syrup available. I could not find the jujubes, although I later saw them in a nearby Polish supermarket. Unfortunately, I found them too late for this recipe so I ended up using normal dates. Finally, the remaining ingredients could be found in the normal supermarket.

And one last example of modern hunting and foraging was finding ingredients for Smørrebrød med paneret rødspætte or Breaded plaice sandwiches. I sourced the fish direct from fishermen in the UK via Pesky Fish. Then, I had to create my own curry pickle remoulade mixture since I could not find curry pickles. Lastly, I ended up making the sandwiches with a rye bread, but not the traditional Scandinavian dark rye bread. My friend who sent me the recipe noticed this immediately in the photo, and said that the type bread is very important! Next time I will hunt a little bit harder to find the traditional bread, as I am sure it exists at one of the many bakeries!

Modern hunting and foraging is part of the fun of cooking international foods. What can you find and what do you need to creatively substitute? I am lucky to live in London, a very diverse city. It is possible to find most ingredients here, even if they are expensive. However, whenever I have not been able to find something, I have made substitutions. In the end the dishes are still very tasty, if not completely authentic!

PS The photo is from when I made Pakistani Chicken Biryani. I did not have to do too much hunting and foraging, though the list of ingredients was incredibly long! Most of the spices and other ingredients could be found in the supermarkets of London.