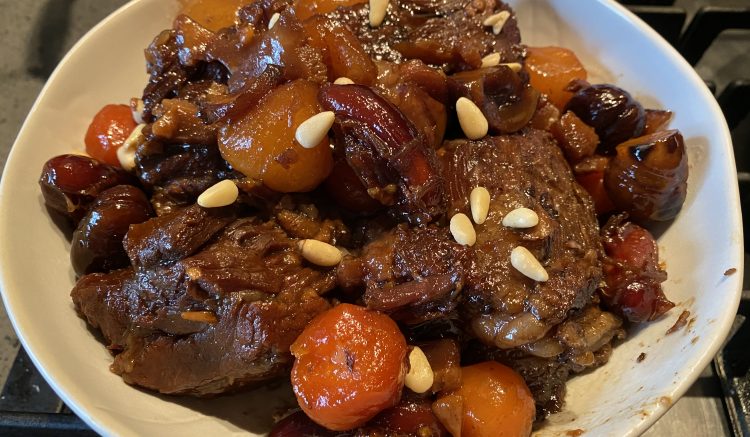 This recipe for Galbi Jjim (Korean Braised Beef Shortribs) was given to me by my Korean-American friend Dave. He shared a link for a recipe by Maangchi and then gave me a few extra tips from himself and also his mom. His first important tip was about rinsing the shortribs enough times. Then a second tip was to marinate them in the sauce overnight after par-boiling. Therefore, this recipe is an adaptation from Maangchi, enhanced by the advice of Dave and his mom!

The first step was searching for beef short ribs, which is not a common cut of meat sold in the supermarket. In the end, I found them at a specialty butcher, Hook and Cleaver. And I rarely say this, but the meat was actually beautiful, marbled with fat. Next, I went searching for the Korean ingredients at Duri Mart Korean store. The owner helped me search for the ingredients I needed, and luckily had fresh Korean radishes and rice syrup available. In addition, I received extra tips from the owner for the preparation of the dish. First, he said not to parboil the ribs for too long or they lose their flavour. Then he also recommended using normal dates if I could not find red dates, as those were trickier to find. Finally, the other ingredients could be found in the normal supermarket.

Before you start this recipe, be warned that it takes some time. In fact, I prepared this over two days in the evening after work. In the end, the verdict was that it was worth the wait! The meat was so tender that it melted in the mouth, and with an amazing flavour that was a mix of salty and sweet. All of the vegetables and accompaniments added to the flavour and texture. And it did seem important to make the vegetables into round shapes as they absorbed the flavour better. I found this out because I got lazy at the end and threw in some cubes of Korean radish. They did not absorb as much flavour from the sauce as the round ones.

For the beef short ribs

Soak the dried shiitake mushrooms in hot water for about 5 minutes. Set aside.

Rinse the ribs and soak in cold water for 15 minutes in the refrigerator. Change the water and repeat 3 times.

In the meantime, make the seasoning sauce and prepare the vegetables. Drain the mushrooms and put them in a container to save until the next day. Reserve the water from the mushrooms, and fill to make 2 cups. Then cut each mushroom cap into quarters and transfer to a plate. Transfer mushroom liquid to a medium bowl. Add the soy sauce, mirim, sugar (or swerve), ground black pepper, garlic, and ginger and mix well with a spoon. Set the seasoning sauce aside.

Fill a large, heavy pot halfway with water and bring to a boil over medium-high heat. Drain the ribs, rinse again, and add to the boiling water. Par-boil for 5 minutes, stirring a few times. Drain and rinse thoroughly with cold water. Put the ribs into a container or a Ziploc bag, and add the seasoning sauce. Coat the ribs well, then cover and refrigerate overnight.

Add the seasoned ribs to a large, heavy pot over medium-high heat. Cover and cook over medium-high heat for 20 minutes. Turn down the heat to low, and cook for 1 hour, stirring occasionally. Next, add the mushrooms, chestnuts, radishes, and carrots. You may need to top the pot up with a cup of water. Cook for a further 45 minutes, stirring occasionally. Stir in the jujubes (dates) and rice syrup. Cover and simmer for another 10 minutes. Meat should by now be falling off the bone. If the meat does not feel tender enough, then add some water (about 1 cup) and cook a little longer, anywhere from 15 to 30 minutes, depending on the thickness of the short ribs.