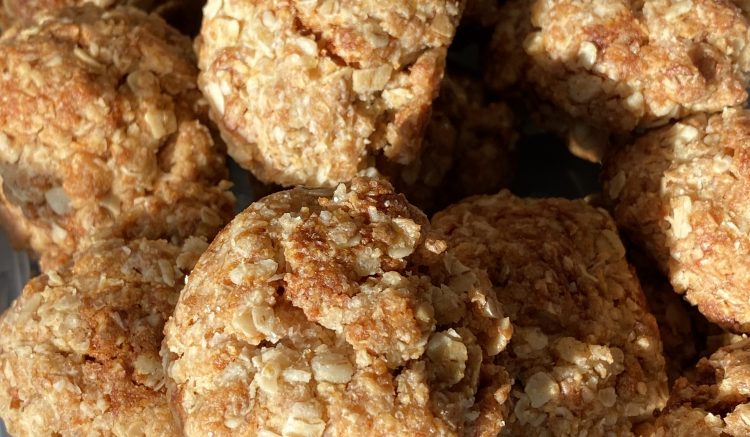 This recipe was given to me by my Australian friend Ross. He sent a photo of a recipe that his mum has made for his family since they were kids. I don’t know the original source, but the chapter title in the photo is “Cooking for your baby”. Perhaps that means that Australian kids get introduced to these delicious and historical biscuits at an early age!

The reason that these biscuits are so historical is because they are strongly associated with World War I. And it has been claimed that these nourishing and long-lasting biscuits were sent to soldiers on the front lines. In fact, I don’t really know if that is true but it’s a nice story. And it is true that these egg-less biscuits can last for months and maintain their tastiness!

ANZAC stands for Australian and New Zealand Army Corps and ANZAC day is an important holiday on the 25th April. It is no wonder that these biscuits with an important name have remained popular for decades!

In a large mixing bowl, combine oats, flour, sugar and coconut. Gently melt the honey and butter in a saucepan over medium-low heat. Combine baking soda with boiling water then add to the melted butter and honey.
Add the butter mixture to dry ingredients. Mix well.

Place Tablespoon-sized balls of dough on greased baking sheets. You may need to pack the balls together with your hands. Flatten slightly as the biscuits will not naturally spread. Bake for 20 minutes. Remove from oven, cool and then serve.

Modifications: Yes you can add golden syrup instead of honey. The different recipes online are divided between honey and golden syrup, but I am not picky.