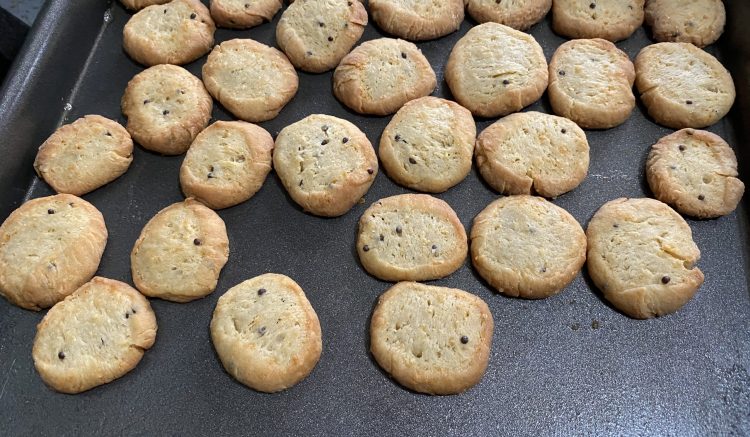 Have you ever tried to re-create a recipe based on the ingredients listed on a package? Well, that is exactly what I did for this recipe after trying the Michel et Augustin petits sables. It took me three tries to get it right. And the first two tries were edible but lacked the crispiness (probably too much egg).

The store-bought versions are delicious and we usually cannot resist eating the whole bag at one time. So, I would still buy them if they were available in England. Since I can only find them in France, I decided I would make my own until the next visit to France. There are many different flavours available including parmesan, comte, roquefort, beaufort, cantal and Ossau-Iraty. All of those delicious cheese names make me hungry just thinking about them. The parmesan is dry and flavourful and I like the mustard seed accent, so I decided to try that version first. These go very well with beer for an apero (French version of happy hour)!

In a large mixing bowl, mix the flour and cornstarch with the softened butter. Then mix in the egg yolk. Fold in the parmesan cheese, sugar, mustard seeds, mustard powder and salt. Mix until a soft dough forms.

On a floured surface, roll the dough into two strands of dough about 1.5cm in diameter. Cut the dough into rounds, about 0.5 cm thick. Place on a baking sheet. Bake for about 16-18 minutes or until the rounds are golden brown. Cool, then eat as a snack. They should be crispy and crumbly!

Modifications: If there is another cheese you like, you can replace the parmesan cheese. However, these work better when you use dry, strong-flavoured cheeses.