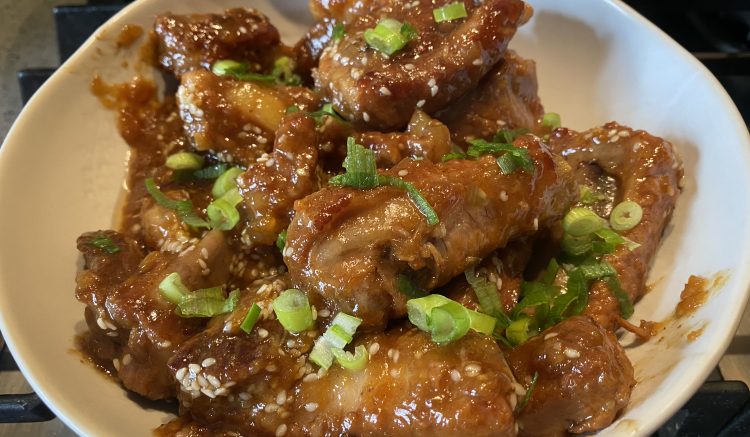 Chinese food, or what we consider to be Chinese food, is very prevalent around the world. This includes all of the places I have lived- USA, UK, Vietnam and France. However, the food we are accustomed to eating, including sweet and sour sauce, can be very different to the authentic version. For example, I am not sure that ketchup is a staple ingredient in traditional Chinese cooking… So, I asked my friend Janet Wang for a more authentic recipe and she sent me this recipe for sweet and sour spare ribs from China Yummy Food.

I should mention that Janet is the author of the book Chinese Wine Renaissance, which traces the history of wine from ancient times until the present. In addition, she has presented some excellent talks via A Note of Mandarin about matching Chinese food and wine! Janet recommends either the Rongzi Pinot Noir or Martin Vineyard Cabernet Gernischt to complement the ribs.

I modified a few parts of the recipe for simplicity and due to the availability of ingredients in my kitchen. For example, I replaced the three dried plums with three fresh red plums, peeled and minced. I think this substitution was a nice variation as the plum flesh reduced through cooking and added to the sticky texture of the sauce. In addition, I replaced the rock sugar with normal granulated sugar. Since I had read that rock sugar is slightly less sweet, I reduced the amount slightly. And lastly, I increased the amount of spring onion slightly, because I like more of this fresh taste mixed in with the spare ribs. Also I think my rib pieces may not have been as small as recommended but my knife only managed to cut them in half where there was no bone. For the future, perhaps I need a bigger cleaver.

During the cooking process, the aroma throughout the kitchen made me really hungry, anticipating the first taste. Finally, the end product was tender, sticky and with a flavourful balance of sweet and sour.

Peel the plums and remove the pits. I recommend the Zyliss soft skin peeler! If the pit is stuck to the flesh, you may need to cut the plum into segments to detach them from the pit. Then mince the plum flesh. Mix minced plums, cooking wine, light soy sauce, 3 Tbsp vinegar and water in a bowl to make a sauce. Set aside.

Cut the spare ribs into small pieces. Heat a pot with clear water, add 2 slices of ginger and spare ribs. Heat over high heat until boiling. Boil for about 5 minutes to remove impurities. Drain and transfer the spare ribs to a shallow bowl. Heat a wok with oil, and stir-fry rock sugar over medium heat until melted and golden.

Remove the lid and turn to high heat, continue to cook until the sauce has thickened. Stir often. Add 1 teaspoon of vinegar, then sprinkle with white sesame seeds and green onion. Quickly toss, then transfer to a plate and serve.