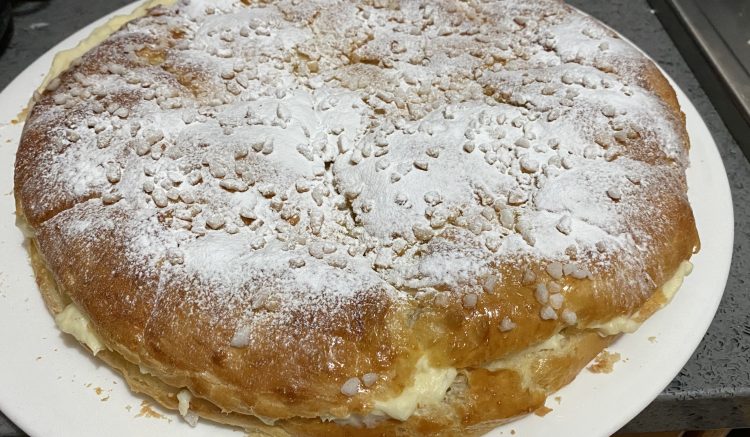 The French excel at making desserts and patisserie. One of the highlights for me is the Tropezienne. It is not found in all patisseries, but trust me, it is worth searching for one when you visit France. Originally the Tropezienne comes from St. Tropez, as the name suggests, but it can be found in other areas around France. This recipe for Tropezienne does take some time but it is worth it!

The cake is similar to a brioche dough, which is shaped in a large circle. The cake is then sliced to form to equal circles, then filled with a light, vanilla cream. The crunchy grains of sugar on top add to the textures and sweetness that make this dessert incredibly unforgettable.

In a large mixing bowl, add the flour, sugar and salt. Mix together. Warm the milk and then mix the dried yeast in the warm milk. Pour into the flour mixture and mix with a wooden spoon. Add the egg and fleur d’oranger. Mix well until a uniform dough forms. Add the softened butter and fold into the mixture. You can use a wooden spoon to mix dough for at least 5 minutes, or if you have bread dough hooks on your mixture then that works as well.

Cover the dough with plastic wrap and leave to rise for one hour at room temperature. Then chill dough in the refrigerator for one hour.

Remove dough from the refrigerator and roll the dough into a large ball. Flatten the ball into a circle about 20 cm in diameter. Brush the top of the dough with beaten egg. Then let sit at room temperature to rise again for about an hour.

Pre-heat the oven to 180 C. Brush the top of the dough again with egg and then dust with the icing sugar and sprinkle generously with grains of sugar.

Bake for 20-25 minutes until golden brown. Turn off the heat and leave the brioche in the oven until it cools.

In the meantime, prepare the cream filling. In a large saucepan, add the milk and vanilla bean paste. Warm over medium low heat.

In a separate bowl, whip the cream until it forms medium-firm peaks. Fold the whipped cream into the cooled vanilla cream mixture.

Cut the brioche in half to form two equal circles. Spread the cream on the bottom half of the brioche. Carefully replace the top, dust with more icing sugar and serve.