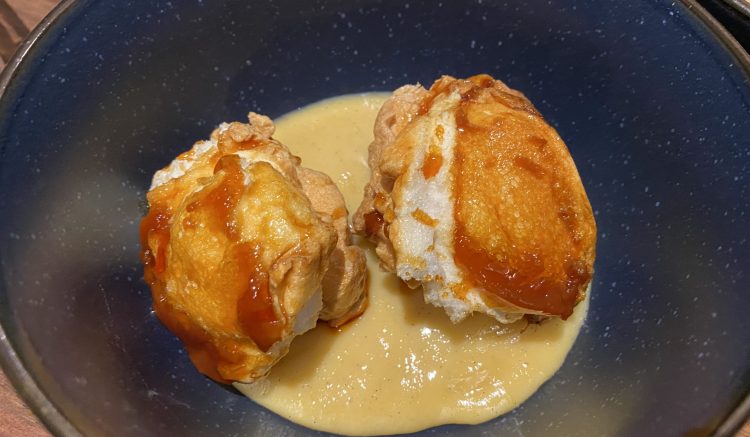 This recipe for canonigos comes from the Filipino cookbook, Kulinarya, by Neal Oshima. He describes canonigos as the Filipino version of île flottante, the French dessert, and that’s pretty accurate. However, I think that the Filipino version is even more intense and sweet! This is because the custard uses evaporated milk rather than fresh cream. The light meringue, sweet caramel and rich, creamy custard make an irresistible combination.

When I made this dessert, it was as part of a lunch party where I had also cooked Ukoy shrimp fritters, pancit noodles, and chicken adobo. Since those dishes are salty, this dessert went well to finish the meal. The recipe for canonigos takes some time and a lot of different kitchenware, but it is not difficult. Also, my meringues were not particularly pretty but they still looked nice when served in the custard!

Pre-heat the oven to 180C or 350F. Also ensure that you have a stainless steel mould. I used a cupcake tin. And a slightly large baking dish in which the mould/tin can fit in a bain-marie (shallow water bath).

First melt 1 cup of sugar in a saucepan over medium heat. Stir constantly with a wooden spoon. Bring the sugar to a boil and stop stirring. Reduce the heat to medium and gently swirl the mixture in the pan until uniformly golden brown and caramelised. Then add the hot water and mix with the spoon.

Pour 1 Tablespoon of syrup into each cup of your mould or tin. Then roll the syrup until the entire inner surface of each cup is coated. Do one at a time before the syrup solidifies. There should be enough for 10-12. Set aside.

Second, you will prepare the meringue. In a mixing bowl, beat the egg whites with a hand mixer until soft peaks form. Add the 1/2 cup sugar gradually, beating continuously until the peaks are stiff but not dry. Divide the meringue among the moulds. Then flatten the tops slightly with a spatula. Put the moulds or tin into the bain-marie.

In the pre-heated oven, bake the meringues for 30 minutes and then remove from the oven. Cool for 15-20 minutes in the bain-marie then invert the moulds onto serving plates.

Serve the meringues with custard on the side.