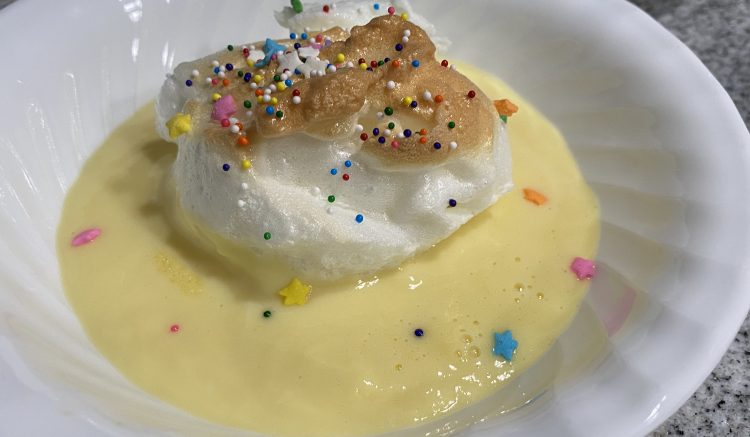 The île flottante is one of my favourite desserts in France, and I first discovered it while living in Paris. Literally translated as Floating island, the dessert consists of a fluffy meringue floating in a creamy custard sauce. It is simple, light and delicious. This recipe for ile flottante is adapted from several I saw on Marmiton, a website for French recipes in French. And my eight-year old niece creatively added some bling to the dessert with coloured sprinkles. I think that only made it better! If you want it to look more traditional you can drizzle with some caramelised sugar.

First, in a large mixing bowl, beat the egg whites until stiff. Slowly beat in the caster sugar. Then line a large baking tray with grease-proof paper. Scoop the egg white mixture into eight equal-sized mounds on the tray. Then place into the oven and bake for about 20 minutes, or until lightly browned on top. Remove the meringues from the oven and set aside.

For the custard, in a large saucepan, heat the milk and vanilla over medium heat. When it is warm, whisk in the sugar and the vanilla. In a separate bowl, whisk the egg yolks. Then transfer about 1/4 of the warm milk mixture into the egg yolks, mixing constantly. Reverse that mixture into the pan with the rest of the warm milk. Whisk continuously, and stir until the custard is thick. Let the custard cool for at least 20 minutes. Then it can either be served warm or chilled for longer in the refrigerator.

When ready to serve, prepare the bowls with the custard at the bottom, then add a meringue in the centre. It can be served as is or decorated. For the traditional topping, melt about 8 Tbsp granulated sugar in a saucepan over medium heat until it is golden in colour. Then quickly drizzle the melted sugar over each of the eight meringues. Or for a more colourful option, add sprinkles on the top of each meringue.

One other variation, if you prefer a more liquid custard, is to add some more milk when preparing the custard. I have also seen some île flottantes served in what appeared to be fresh cream rather than custard.