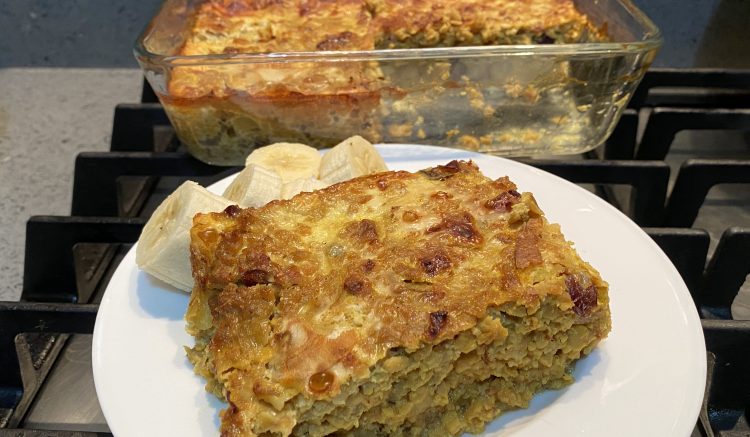 The original recipe for Bobotie was recommended by my South African friend Catherine. Although she recommended the traditional recipe, she prefers vegetarian foods, so I decided to try a variation. Here is my adapted recipe for vegetarian Bobotie using soy mince instead of beef mince. In the end, I found the texture was similar, but I needed to add more spice to keep the flavour. Otherwise the soy mince flavour was overpowering.

As with the last recipe, I used some of the same slight variations of ingredients. For instance, I substituted apple pear chutney for apricot or peach chutney. In addition, I used mashed apricots from a tin instead of apricot jam. Finally, the most untraditional substitution was dried cranberries instead of sultanas. As mentioned before, I prefer Craisins to raisins. These add sweetness and tanginess at the same time.

I served the vegetarian Bobotie with rice and sliced bananas and forgot about the shredded coconut. Still, it tasted good and was very filling!

Soak the bread in the milk in a small bowl. In a separate bowl, soak the dried soy mince in 2 cups of hot water. Heat the oil and butter in a large frying pan over medium heat, and fry the onions and garlic. When the onions are soft, after about 6-8 minutes, add curry powder, salt, chutney, jam, vegan Worcester sauce, turmeric and vinegar. Mix well.

Next, drain and mash the bread in a separate bowl. Reserve the milk. Add the bread to the pan along with rehydrated soy mince and sultanas (or dried cranberries). Cook over low heat, stirring occasionally for about 5 minutes. Remove from heat and cool for 5 minutes, then add 1 beaten egg to the mixture and mix well. Then spoon the mixture into a large glass baking dish.

Beat the remaining egg with the reserved milk. Add the pinches of salt and turmeric. Pour over the meat mixture and scatter the bay leaves on top. Put the baking dish in a shallow water bath then bake in the over, uncovered for about 45 minutes or until set.