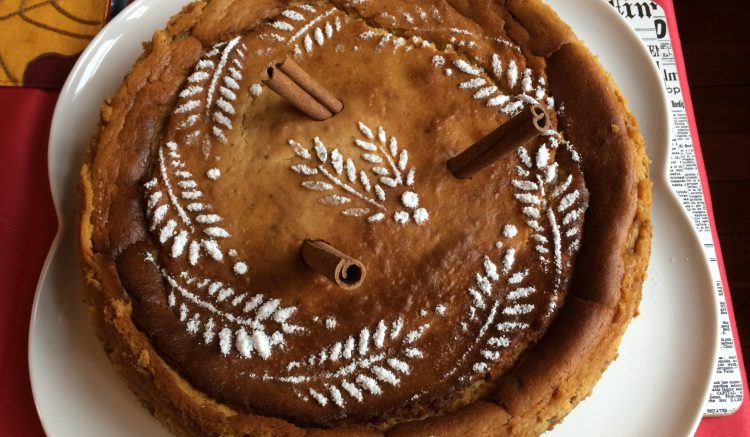 Pumpkin pie is a must have dessert at Thanksgiving. However, this recipe for pumpkin cheesecake has become more popular among guests, especially French friends! I asked one of them about this, and he said that pumpkin is usually a savoury dish in France, such as for soup. A dessert made from pumpkin seems unusual, but the cheesecake taste is stronger than the pumpkin so that tastes more like a dessert. I’ve decided it is a good idea to make both pumpkin pie and pumpkin cheesecake, as I don’t mind having leftovers for the next few days!

One big choice, regular or light cream cheese (AKA Philadelphia in the UK)? After looking at the calories in 900g of normal cream cheese, I decided to go for the light version. In fact, I think the taste is the same and no one has ever mentioned noticing a difference. I think the British ginger nut biscuits may be a little bit less spicy than American gingersnaps, but they work quite well for the crust.

The water bath is a good idea but my water bath dried out towards the end. The cheesecake still turned out well. You may notice that it puffs up a lot in the oven, but then settles once it cools down. That is okay, since then you get the typical dense cheesecake texture.

Finally, there are many options on how to decorate the cheesecake. Originally, this recipe for pumpkin cheesecake came from an American friend who brought it to a pot luck Thanksgiving. The recipe suggests to serve this with whipped cream, the kind you spray out of a can. However, I also thought it was nice to do powdered sugar designs using stencils. However, the sugar only lasts for a few minutes before soaking up the moisture, so do the dusting just before serving. I also sometimes use some cinnamon sticks as decoration.

First, place ginger nut biscuits in a food processor, and process until finely ground. Then add the pecans, melted butter, sugar, and cinnamon. Process just until combined and the mixture holds together. Transfer the crust mixture to a 9-inch non-stick springform pan, and spread evenly to make the crust, lining the sides of the pan about 1 1/2 inches of the way up. Bake for 10 minutes. Cool completely on a wire rack.

In a small bowl, mix the flour, ginger, cinnamon, and nutmeg; set aside. With an electric mixer, beat the cream cheese and sugar on medium speed until light and fluffy, about 2 minutes. Add pumpkin, bourbon or rum, vanilla, and flour mixture. Beat to combine. Then, add eggs, one at a time, beating to incorporate after each addition.

Pour the batter into the crust. Wrap the outside of the springform pan with a double layer of aluminum foil. Place in a roasting pan. Add enough hot water to come halfway up the sides of the springform pan. Bake until the cheesecake is set in the center, about 1 hour and 45 minutes.

Remove from water, and cool on a wire rack. Remove foil, and refrigerate for at least 4 hours. Use a plastic knife to loosen the edges from the springform pan. Then open the spring and transfer to a plate. Serve with whipped cream or icing sugar sprinkled on the top.

Go to US Recipes