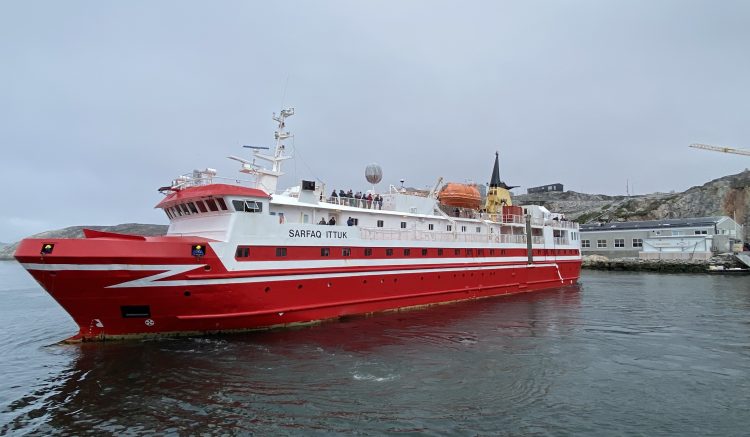 Introduction to the Arctic Umiaq Ferry

As mentioned in the post about Greenland, travel between cities can be complicated. There are no direct roads so the options are either airplane, helicopter or the coastal ferry boat. The Arctic Umiaq coastal ferry has two main advantages over flying. First, you can see more of the landscape during the Arctic ferry journey. Second, the ferry is not at risk of being cancelled due to fog.

We departed from Ilulissat on Sunday 10th July at 17:00 and arrived to Qaqortoq on Wednesday 13th July at 16:00. On the way, there were stops in Aasiat, Sisimiut, Kangaamiut, Maniitsoq, Nuuk, Qeqertarsuatsiaat, Paamiut, and Arsuk.

Finding the Ilulissat ferry port was easy. However, until I saw the boat dock I wasn’t sure where it would be able to turn in the small space. The workmen tie up the boat and lower a ramp for boarding. There’s a small cabin to check in and pick up the ticket. It’s quite informal with no passport nor luggage check. It also appears there is no luggage limit. Someone even brought their own raft boat, which was stored on the top deck.

Some of the guests on the ferry had decided to take it from Ilulissat because the flights had been cancelled. One girl I met said her flight was rebooked for five days later! Three extra days in Ilulissat and then two more in Kangerlussuaq.

On the way from Ilulissat to the first quick stop at Aasiaat, we were lucky to see some humpback whales swimming near the ferry!

What is a couchette?

I had the unique and enjoyable experience of living in a couchette on the Arctic Umiaq Line coastal ferry for three days. A couchette is a bed, either upper or lower bunk that’s in a section of either 4 or 8 beds. I was in a group of 8 on the 3rd level. We had a nice big window and I was lucky to have a lower bunk with a view out the window. A few of my travel companions from Ilulissat to Nuuk were very friendly and chatty. One elderly lady from Copenhagen and two Greenlandic ladies. I enjoyed chatting with them and learning about Greenlandic life!

The couchette comes with a small pillow and disposable pillow case and sheet. You can buy a blanket from the shop. In fact, the tour agency had already paid for one so I just had to show my receipt at the shop. Interestingly, the blanket is one from IKEA and although it’s reusable I guess most people just leave it when they’re done. There’s a reading light, and a stretchy net to hold your water bottle and some other small things. There are also curtains to have a bit of privacy. Eyeshades and earplugs can be useful for a good night’s sleep.

On the boat, there are some cabins available but these were sold out by the time I booked. I guess these need to be booked far in advance! The couchettes are located on levels 1, 2 and 3. I was on level 3 in bed 360. On the brochure, it says some couchettes have no window so that might be on the lower levels. Level 3 was great and also the same level as the restaurant.

Facilities on the Ferry

There are several bathrooms, some of which also have a shower. There is toilet paper and soap. However, you need to bring your own towel and any washing products. Also I would recommend shower slippers, since it’s the same floor as the bathroom and it’s cleaned only occasionally.

There is wi-fi available on the boat. In July 2022, this was 50DKK for 30 minutes. However, the local lady I met said it’s very slow and not worth using it unless we are close to a town.

On board the boat there’s a restaurant which serves breakfast, lunch and dinner at set times. The prices are reasonable and the portions are large. Usually there were two choices for lunch or dinner. For example a lunch could be soup and bread or chicken wings and rice. For one dinner, I had two red fish steaks, potatoes and vegetables for 105DKK (around £12). There are also always snacks and drinks available for purchase. In addition, there is a vending machine in the lounge room with snacks and drinks.

The lounge room has a massage chair that costs 20DKK for 10 minutes. There’s a movie room, and once in awhile there was a movie playing in there. My favourite thing to do besides reading, was to walk around the decks on levels 4 and 5. The scenery was always changing and it was especially nice when the sun was shining.

Quick stops During the Journey

During the Arctic ferry journey, the stops were short and just meant to unload and load passengers. The most exciting to watch was at Kangaamiut. The boat was too large to go into the port, so a smaller propeller boat was lowered into the water. All of the guests had to wear an orange life jacket suit. Then they went with their luggage into the boat to go to shore. Other passengers came back in the same way. Then the boat was lifted back onto the top of the ferry and we continued on our way. There was a similar port at Arsuk with the small boat shuttle. The only port I didn’t see was Paamiut, because we stopped there for 30 minutes at midnight.

The landscape around Maniitsoq was stunning, with snow-topped mountains and parts of the ice cap visible on the land. A lot of the way, we had a view of the misty ocean but it was always interesting to go on deck when we neared the next port.

After the second to last stop at Arsuk, it was a further 9 hours until Qaqortoq. There was nice scenery especially when we went between small islands and could see the landscape. There were also some large icebergs around.

Stops with Time to Explore

We had enough time to get off the boat and walk around in Sisimiut and Nuuk. Just remember to take your boat ticket to get back on! It was nice to have some time on land to break up the sea travels. During the three-day journey we had a land stop for a few hours once per day.

Sisimiut is a beautiful town with scenic views, especially up on the hill near the church. Also, the museum of the old buildings in the town is interesting. In addition, museum entrance includes free wi-fi. There are also supermarkets and a bank if needed.

Nuuk is the capital, and a bigger town. There are plenty of shops and cafes, though not everything is open during the stop from 6:30-9:30. There’s a nice boardwalk to walk along the sea and old town Nuuk has many quaint and colourful buildings.

I was glad I had brought some books to read. It helped to pass the time, especially since I did not have an internet connection.

I was also glad to have the seasickness pills. At times, the boat rocked a lot. Especially when we weren’t cruising between islands.

The staff on the boat are very efficient. At each stop they need to clean off the couchettes of departing passengers. They they put new bedding out. They also clean the hallways, common areas and bathrooms.

Bring your own towel if you plan to shower. I brought a micro-fibre camping towel and that worked perfectly. There is no hairdryer available.